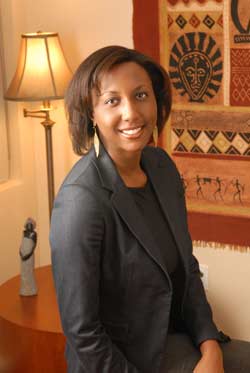 She recalls how her Nigerian-born parents took her, as a young girl, to the family’s ancestral home every summer. What she saw there, she said, stuck with her.

“I noticed a huge gulf between my experiences in the U.S. and the reality of life in a place like Nigeria, where the vast majority live in poverty,” said Mgbako, an associate clinical professor of law and supervisor of Fordham Law School’s new Walter Leitner International Human Rights Clinic. “I wondered: How could there be so much bounty in one place and such a lack in another?”

Witnessing such bracing inequity set Mgbako on the path of human rights advocacy, she said. After earning a degree in history from Columbia University, Mgbako traveled to Ghana to teach women’s history and human rights to high school students. She next attended Harvard Law School, and after graduating, worked as a human rights fellow with an international anti-conflict organization in Dakar, Senegal.

“A lot of the justice systems in the developing world are in crisis,” Mgbako said. “There is a role for us to play in contributing to their work and bringing some of our skills to them.

“But it is also symbiotic,” she said.

In her role as the Leitner Center’s first human rights clinical professor, Mgbako is back in the United States, building such symbiotic working partnerships between Fordham law students and activists in developing nations. The clinic’s goal is to help students understand how law can be a tool for social change, Mgbako said.

“A lot of students come into law thinking about public service,” she continued. “There is no better way for them to see how these issues affect people in the real world than for them to gain practical experience in human rights lawyering and advocacy.”

Mgbako was the Crowley Fellow in International Human Rights in 2006-2007 before joining the Fordham faculty and being named supervisor of the clinic.

As a fellow, Mgbako coordinated a yearlong study with Fordham students and professors on the impact of discrimination and stigmatization against women with HIV/AIDS in Malawi. Based on interviews with more than 300 women living with HIV/AIDS in rural and urban areas, as well as 200 interviews with leaders, workers and government officials, the Leitner Center documented some shocking practices and prejudices.
A dire economy and women’s low social, cultural and economic status means that women in Malawi are vulnerable to HIV. They sometimes engage in sex work to get food, fertilizer and other basic staples. Those that are married are often at the mercy of their husbands, who may have two or three wives. Once infected with HIV, women are often ostracized; their property is taken with impunity, their jobs are at risk, and their children are ridiculed.

Like many African nations, Malawi has few legal resources available to help such under-represented populations. The nation of 12 million people has between 300 and 350 qualified lawyers, most of whom are urban-based in a population that is rural-based.

“The story we tell in Malawi is really the story of the continent,” Mgbako said. “Africa is ground zero for HIV/AIDS. 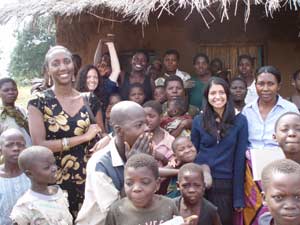 “The clinic’s approach is to focus on specific countries and develop relationships with partner organizations on the ground. That way, we can really have an institutional impact.” In the fall of 2007, Mgbako returned to Malawi with clinic students to conduct human rights and HIV/AIDS training workshops with over 200 HIV-positive women in four districts of the country.

Just last month Mgbako traveled with students to India to work in conjunction with SANGRAM, a grassroots women’s rights organization, on the education and prevention of HIV/AIDS among commercial sex workers.

While AIDS remains a high priority for the clinic, Mgbako is supervising work on other critical issues as well. The clinic will visit Ethiopia and Sierra Leone in March to focus on legislative and grassroots endeavors. In Ethiopia, the clinic is working with Addis Ababa Law School to measure the effectiveness of the new Ethiopian constitution in protecting human rights and balancing judicial power.

The clinic then will go to Sierra Leone to work with a community-based paralegal program on two critical issues facing the nation’s poor. The first is the issue of female genital mutilation, a widely practiced ritual among communities in Africa and the Middle East. Mgbako hopes the clinic can make recommendations to grassroots organizations on how to outlaw such practices.

The second issue concerns the collection of child maintenance payments. Mgbako explained that the government passed a law recently that enables women to collect child support from negligent dads, but only in the form of cash. In rural parts of the country, people barter with goods and services instead of cash. The clinic hopes to develop a creative solution that can work as a revision to the law.

To prepare for their work abroad, students do research on the political and cultural histories of the countries they are to visit and get training in human rights research and advocacy skills. But nothing, Mgbako said, can truly prepare them for the cultural shock.

“But I don’t think shock is a bad thing,” Mgbako said. “Take a place like Sierra Leone; it’s one of the poorest countries. As someone who had worked extensively in Africa, it was even a shock to me. It’s had a horrendous 10-year civil war; we should be shocked by what we see there. That is part of the learning process.

“But the question is do you let that shock paralyze you, or do you use it as a motivating factor? If we can prepare the students, they won’t be paralyzed by the shock of such poverty. They’ll feel empowered to act.

“Through the clinic’s experience, they can see just how these issues affect people in the real world,” Mgbako said, “and can see themselves as global citizens and advocates effecting global change.”