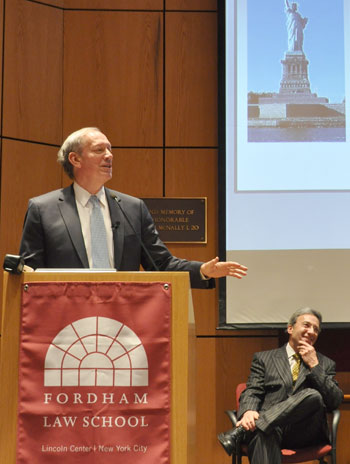 A panel of legal scholars led by former New York Gov. George Pataki debated whether Puerto Rico should choose statehood or independence from the United States at Fordham Law School forum on March 26.

Constitutionally considered a U.S. territory since 1898, the island of four million U.S. citizens remains under the sovereignty of the federal government. It receives some of the benefits endowed upon the 50 sovereign states and is subject to most federal laws.

But Puerto Rico has no voting representative in Congress and its citizens are not allowed to vote in federal elections (although they can vote in presidential primaries).

Enhanced Commonwealth (EC) status, she said, would allow Puerto Rico to strengthen its union with the U.S. while still maintaining a sense of self-determination. Proposals for an EC include:

• guaranteed U.S. citizenship and guaranteed federal funding on programs for education, health care, veterans and other areas;
• separate membership in the U.N. for Puerto Rico;
• power to enter into treaties with other nations;
• the right to nullify certain, but not all, U.S. laws within its own territory.

Duffy said that the people of Puerto Rico have voted for commonwealth status on at least two occasions, but that the congress has “basically ignored them.” What must be done, Duffy said, is to decide whether a constitutional basis exists for creating an EC.

Pataki, however, said no such constitutional basis exists; therefore presenting the people of Puerto Rico with such an “invalid option” was misleading.

“The odds of a U.S. Congress ever passing a law—and a president signing a law—that allows a part of this country to form treaties, or to join the U.N., is about zero,” said Pataki, who was instrumental in stopping U.S. military weapons testing on the island.
“
The true choice is whether you are going to be a territory dependent on those people in Washington who you are not able to vote for, or are you going to become a state?”

The forum was sponsored by the Center for Puerto Rico Equality & Advancement and Fordham Law School.