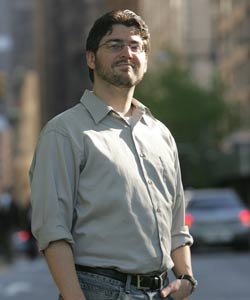 Brian Honermann, Fordham Law School’s first recipient of the James E. Tolan Fellowship in International Human Rights, has come a long way since his high school days, when he worked on behalf of a homeless food pantry. As an undergraduate at the University of Wisconsin, Madison, Honermann co-owned a coffee shop that practiced Fair Trade sales, and was active in anti-sweatshop campaigning. His involvement in global activism while at college influenced his decision to attend Fordham Law School and to combine law with human rights advocacy.

“Human rights had always been an area I’d thought about,” said the 2007 Law School graduate, who hails from Mankato, Minn. “It’s understanding human development around the world, and making sure that it happens—as students, consumers, lawyers—as advocates.”

As a Tolan Fellow, Honermann will travel to Johannesburg, South Africa, in September to spend a year working on the Treatment Action Campaign (TAC) and the AIDS Law Project to help secure HIV/AIDS treatment for underrepresented populations. The award, which falls under the umbrella of the school’s Crowley Program in International Human Rights, is named in honor of James Tolan, LL.B. (FCRH ’59, LAW ’62), senior counsel at Dechert LLP. The award sponsors one Fordham Law School graduate annually for his or her work with an international human rights organization and allows its recipient to choose the organization and country of destination.

Honermann chose South Africa because he spent last summer in Cape Town as a 2006 Crowley Scholar. He helped file suit on behalf of 15 HIV-positive prisoners who were not receiving anti-retroviral treatment, and co-wrote an $11 million Global Fund proposal. He is already familiar with the nation and its courts.

“My goal is to arrive, hit the ground running, and do as much good in a year as I possibly can,” he said. “My experience from last year will allow me to do more than if I went to someplace I’d never been before, and had to take the time to get up to speed.”

On a recent trip to New Orleans with the Student Hurricane Network, Honermann and a group of Fordham Law students helped displaced resident homeowners, who had no proper legal titles to their lost or damaged homes, secure federal funding. That situation is an example, he said, of how too many poor people—up to 80 percent globally—live outside of “the Rule of Law” that is ostensibly designed to benefit those very people.

“Without a formal title, a house is dead capital,” he said. “If we look at where the bulk of development funds go, we really don’t get it to those people who need the most access to justice. As lawyers, we have to find the way to do that.”

“When we think of the [world’s] enormous problems, some of us might think ‘but what can I do?’ it’s so immense,” he said. “But the fact is, as lawyers, we can do a lot if we have the courage to do so.”