skip to main content
Return to Fordham University
You are at:Home»Inside Fordham»Lectures and Events»Harnessing Expertise

Finding the right mentor can be a lifelong pursuit.

At Fordham’s Oct. 12 Executive Leadership Series, co-hosted by the President’s Council and the Office of Alumni Relations, several Fordham students and young alumni got a chance to sit with successful Fordham graduates, parents, and volunteer executives to hash out popular themes in today’s business world.

On tap: Harnessing the Power of Narrative, Divining the Alchemy of an Argument, and Changing the World of Innovation.

“At each table there were years of experience that was being shared with us younger alumni,” said Nick Sawicki, FCRH ’16. “That’s really invaluable when you’re starting your career.” 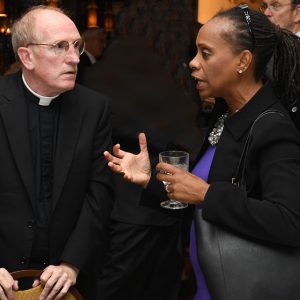 But students and recent graduates weren’t the only ones seeking mentorship. At a reception held for alumni mentors just before the participants arrived, many of the volunteers said that they still seek out mentors.

“I have a mentor right now,” said Anne Williams-Isom, FCLC ’86, CEO of Harlem Children’s Zone. “We all need mentors throughout our career.”

Williams-Isom said that her current mentor is Geoffrey Canada, who preceded her as CEO at the prestigious charter schools. She said that before her current position she worked in government and sought out mentors from that sector. She takes her role as a Fordham mentor seriously, particularly as an African-American woman.

“I don’t know how many young people of color are going to be here tonight, but I’ll guarantee that they will come in and look at me they’ll feel a little better,” she said.

Regina Gonzalez, FCLC ’15, was one of them. She said after she walked in and surveyed the diversity of the room, she felt reassured.

“There’s a very diverse group of women of all ages from different cultures, and that makes me feel confident to come to this event,” she said. 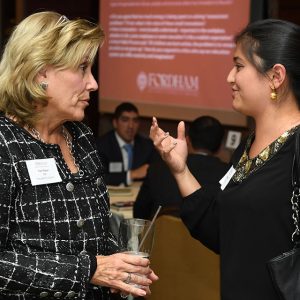 The event attracted 33 alumni mentors for about double the number of students and recent graduates. Needless to say, a room full of well dressed, confident, and successful New York City executives could be nerve-wracking, but Jeff Coltin, FCLC ’15, did not find it intimidating.

“The organizers eased our fears beforehand and told us that they are here to help Fordham, so that definitely made me feel more comfortable,” he said.

Most of the mentors understood that the dark-suited and professional environment might seem somewhat new to student participants.

“Events like this are practice for the real world and it’s a place for students to be able to stumble and make mistakes,” said Williams-Isom .

“The students learn how to make the small talk with people they don’t know,” said Maura Mast, Ph.D., dean of Fordham College at Rose Hill. “This also introduces them to alumni who have had the same majors that they’ve had, and yet have gone in directions that they couldn’t have even imagined.”

Mast was in conversation with Francis J. Conroy, GABELLI ’79, who recently stepped down from his position as COO of the hedge fund group KKR. He said that as he gained more experience, he began to realize that people tend to reach out to mentors more often when they hit a rough patch—which is probably less efficient.

“If I’d been bright enough to stay ahead of the curve and reach out to mentors sooner, it probably would’ve served me better,” he said.

Rather than depending on just one mentor, Conroy suggested the young professionals seek out the opinion of several people they trust.

“Lawyers call it ‘opinion shopping,’” he said. “What usually works for me is something that’s in between a couple of opinions that I’ve heard. Everybody’s got to steer their own course, but it’s great to be able to bounce a few ideas.”

Conroy, who said he’s open to a second career, was on the lookout for mentors of his own. He mentioned returning to the financial services, perhaps the tech sector, or maybe even a nonprofit.

On hearing that CEO of the nonprofit Harlem Children’s Zone was in the room, he quickly scanned the crowd.

“I will definitely talk to her,” he said.

Young alumni lean in and learn.