skip to main content
Return to Fordham University
You are at:Home»Inside Fordham»Lectures and Events»Getting Through to Google

It’s widely known in cyber circles that, when the Arab Spring protests happened in Egypt in 2011, website blockage escalated: Certain governments try to control the information flowing into and out of their countries for political and other reasons.

But exactly when and where such censorship is being done has proven hard to measure. 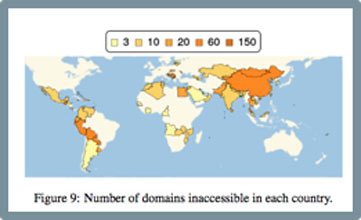 A graphic from a University of Washington study showing the number of inaccessible domains in each country.

Now, researchers from the University of Michigan are enlisting 400,000 servers around the world to monitor censorship and network interference. Their project is called Censored Planet.

“Ideally, a router’s job is to send data forward—but they are smarter now. Some very clever things are being used to block access to information,” said Benjamin Vandersloot, a University of Michigan computer science and engineering doctoral student, speaking on Jan. 10 at the Fordham-FBI 2018 International Conference on Cyber Security.

Say, for example, that you want to send a message to Facebook. Your request pings from router to ISP to another to another (many others) and then eventually to the Facebook server itself.

“If you are in China, you are going to bounce by a router controlled by the Chinese government or a hired hand they control,” said Vandersloot. “China and Iran are the most public countries about web censorship practices. Right now, it’s currently accelerated in Iran because of the protests.”

Although nobody can say for certain that the persons pulling the switches are censoring, the project measures patterns that show connection breakdowns.

“Iran has shown increased censorship before around times of elections, as do many other countries,” said Vandersloot.

There are three ways of censoring internet use: blocking Domain Name service; blocking your IP and TCP connection to the web; and blocking an “application layer” request of a web page. Censored Planet is measuring all three methods, said Vandersloot. The 400,000 servers being used for Domain Name testing receive data “packets,” and the servers send information “packets” back.

“We ask, ‘hey, tell us where is Google is’ and we see the stuff they send us back. We can measure whether we get a result that is genuine,” he said.

“We who work on Censored Planet are in favor of internet freedom. And we’re trying to enable that for everyone.”