skip to main content
Return to Fordham University
You are at:Home»Inside Fordham»Lectures and Events»Arts and Sciences Faculty Day: Sharing the Love
Lecture photos by Tom Stoelker; Event photos by Bruce Gilbert
In an evening honoring her colleagues at the annual Arts and Sciences Faculty Day, Babette Babich, Ph.D., professor of philosophy, held forth on the subject of love in a lecture preceding cocktails and dinner. The title of her talk, “Philosophy or Love, Actually,” examined several aspects of love. 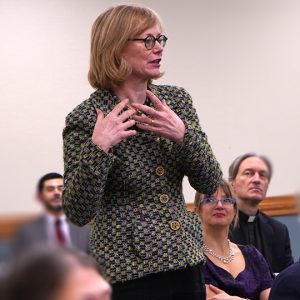 Mary Bly asks a question at the lecture

Babich often peppers her lectures with pop culture references, and this lecture was no different. She began her talk deferring to colleague’s specialties as they relate to wisdom and Harry Potter.

“I am grateful to everyone who is here not just today, but at Fordham—always,” she said. She couldn’t help herself in adding in an aside: “I cannot say ‘always’ without thinking of Alan Rickman’s Severus Snape and his asseveration, his enunciation in Harry Potter,” she said, referencing the moment Snape acknowledges his enduring love for Harry’s mother, Lily. “Fordham is, of course, the Harry Potter school.”

She noted that one of her students once asked her if she was the Harry Potter teacher, but she said that distinction belongs to Judith Jones, Ph.D., associate professor of philosophy who taught a Harry Potter course in London last year. In the audience, Jones beamed at the acknowledgment.

She was to begin her talk by mentioning that philosophy was the love of wisdom, but on the fly decided to scrap the wisdom segment of her talk. She acknowledged that Professor Stephen Grimm, Ph.D., who was also in the audience, is the resident expert on wisdom, and so she moved on to love.

With citations and mentions that included Homer, Heidegger, and Hugh Grant, Babich framed the many kinds of love by referencing not only ancient and modern texts, but also the contemporary films Love, Actually and The Children Act. She said she derived her title based on the theme of love of wisdom, which could be more succinctly described as “love, actually.”

“My theme concerns ‘the love of wisdom’ or love, actually,” she said. “Beyond inclusive disjoint substitutions, my talk is inspired, as I tend to be inspired, by the comma:  love, actually.” 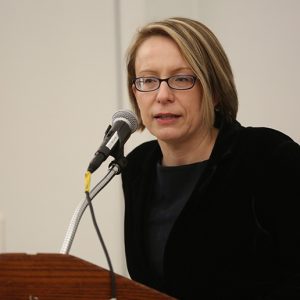 Her references to Emma Thompson in The Children Act went beyond the title to aspects of love that included different kinds of love, including agape and philia, though with less focus on eros.

But this was not the kind of love she wanted to focus on. She said that her interests centered on hermeneutics, “that is, the art of reading even films with love, forbearance, [and]  generosity.” It’s the kind of love that which includes “the benefit of the doubt we lend to speakers at Faculty Day,” she quipped.

“You can indeed read a text with hostility, looking for flaws, tracking an author’s mistakes, but you will miss a great deal,” she said. “Nietzsche recommends love as a method to get to know new things, anything in fact, ‘no matter whether a person, an event, or a book.’”

She said the technique (or German is known as Kunstgriff) is to set out to treat something “with all possible love,” which required setting aside all negative responses in order to allow the person or event “every benefit of hope on their behalf.”

“We all do this in teaching,” she said. “Indeed, love is the prerequisite for scholarship of any kind.” 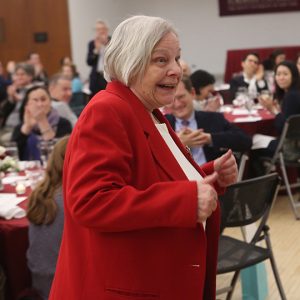 With their minds fed, the faculty left the lecture to celebrate and dine. As in years past, awards for teaching excellence were presented during dinner.

The Award for Excellence in Undergraduate Teaching in Science and Mathematics went to Joan Roberts, Ph.D., professor of chemistry.

“I wish to thank my students for allowing me to teach creatively and the faculty at Lincoln Center for making it a pleasure to come in each day,” she said later.

The Satin Dolls serenading the faculty