skip to main content
Return to Fordham University
You are at:Home»Inside Fordham»Lectures and Events»Clavius Lecture: Big Data Can Read Your Dreams
Yike Guo, Ph.D., delivered the 2018 Clavius Distinguished Lecture. (Photo by Tom Stoelker)
In a lecture on the melding of big data with artificial intelligence, Yike Guo, Ph.D., professor of computer science and founding director of the Data Science Institute at Imperial College London, discussed a variety of possibilities that could be coming in the not-too-distant future. 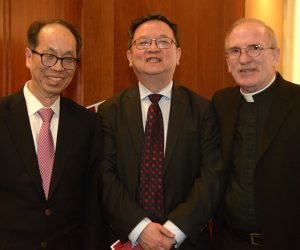 Guo provided some examples by describing the work of his lab. The lab is organized in several sectors, starting with the Hub, which deals with machine learning and data management and analysis. The Hub anchors other labs, including those focused on data economy, business analytics, data assimilation, computational privacy, social and cultural analytics, and behavior.

Often the lab’s work combines two of these sectors. For example, Guo said, the machine methodology of the Hub can overlap with behavior analytics. Together, the two could hold the potential to explain the effects of advertising on a variety of individuals by distinguishing brain reactions based on sex, race, age, economic bracket, and even lifestyle. Subjects cab be wired to an EEG machine to measure brain activity while another machine measures eye movement.

“We want to look at the correlation between the two signals; one is measured on the brain wave and the other is on the eye movement and we translate one signal to the other,” said Guo.

The data can not only measure interest in a particular ad, but also precisely what part of a commercial the subject was looking at when that interest peaked.

Edward M. Stroz, vice chair of Fordham’s Board of Trustees and executive chairman of Stroz Friedberg, gave the first Clavius Distinguished Lecture in 2010.

It’s also easy to imagine health care applications, Guo said. Doctors can compare their patients’ EEG data against the profiles of thousands of participants, while including specific details beyond just the eye movements, such as a person’s gait and other muscle movements.

When the data sets are compared, anomalies readily reveal themselves. This information can have practical diagnostic applications for everything from Parkinson’s disease to sports medicine and neuroprosthetics.

A View into Dreams

This meshing of data, together with a person’s body movements, can literally reveal to scientists what is going on in your head.

“If I point, that involves a sequence of activities and those activities constitute a language, a sentence, a grammar,” Guo said. “So, what you can do is align those sentences with a brain activity.”

Then, from viewing maps of brain activity, scientists can tell which type of motion or gesture a person might be carrying out in their thoughts or dreams.

“The implication is that at night when you’re asleep, from inside our machine I can pretty much know what your dream is all about,” he said. “That’s pretty scary, but that’s the research.”

With such a level of intimacy exposed, Guo said scientists must maintain strict ethical standards and subjects must be fully aware of the implications before agreeing to participate in a study.

For more on big data and artificial intelligence, watch the entire lecture below.