skip to main content
Return to Fordham University
You are at:Home»Inside Fordham»Lectures and Events»Building a Bridge Between the Catholic Church and the LGBT Community
Photos by Michael Dames
In a discussion peppered with metaphor, James Martin, S.J., editor-at-large for America magazine, and Patrick Hornbeck, Ph.D., associate professor and chair of the Department of Theology at Fordham, explored the challenges of bridge-building between the LGBT community and the Catholic Church, even when the church continues to describe homosexuals in its catechism as “intrinsically disordered.” 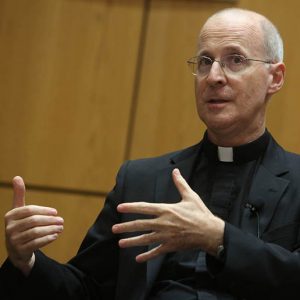 Natalia Imperatori-Lee, Ph.D., associate professor of religious studies at Manhattan College and event moderator, exposed the heart of the evening’s discussion by posing a question: “How do you extend the gift of time, patience, and sensitivity to a group of people who think you should not exist?” she asked.

“I don’t think we’re even there yet,” said Father Martin. “So many bishops don’t even know LGBT people, so we’re not even at the place where they can even talk to them.”

Father Martin, whose new book, Building a Bridge: The Catholic Church and the LGBT Community (HarperOne, 2017), was the inspiration for the discussion, called a bridge an appropriate metaphor for the issue: Both sides need to take steps forward that might rankle them, and reaching the middle is “going to take tolls.”

But even tolls, said Hornbeck, are not always equally distributed; he used the metaphor of the one-sided tolling on New York metropolitan area bridges.

Hornbeck said, and Father Martin agreed, that LGBT Catholics are much more aware of church rules than the average Catholic, because they’re on the defense.
“These are human beings … with committed beliefs. But it’s that unequal toll that we have to wrestle with,” said Hornbeck, who is gay. 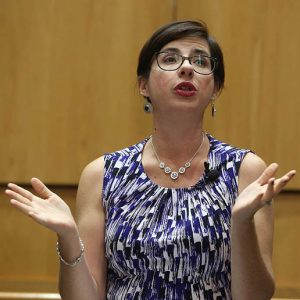 Imperatori-Lee said that “when you live on the margin, the margin is your business.” One reason for LGBT marginalization is the language of the catechism, she said.

In his new book, Father Martin suggests that the Catholic Church examine the expression “intrinsic disorder,” used to describe homosexuality in the catechism.

“As I unpack these virtues of respect, compassion, and sensitivity—which came from the catechism—sensitivity means sensitivity to a person’s feelings and sensitivity to the language you use,” said Father Martin. “There is no other phrase that I know [more]than ‘objectively disordered’ and ‘intrinsically disordered,’ which refers to sexual orientation, . . . that has made LGBT people feel so less-than, so subhuman.”

He relayed the story of a mother of a gay son who once asked him, “Do they understand what that kind of language can do to a 13-year-old boy? It can destroy him.”

Father Martin said that Pope Francis understood the issue when he convened the Synod of Bishops on the family in 2016. That convocation innately raised all sorts of issues relating to sexuality—from divorced and remarried Catholics to homosexuality. As part of the convocation, the pope asked the bishops to survey their parishioners, and many concluded that it was time to start setting stigmatizing language aside. Father Martin suggested an intermediate change, “differently ordered.” 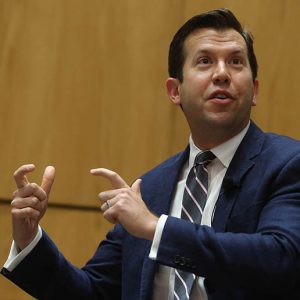 “That language, which is highly philosophical and theological, is nonetheless needlessly hurtful,” he said. “If the Catholic Church really wants to be serious about speaking to people, they have to be attentive to the language they use.”

When Jesus spoke to the people of his time, Father Martin said, he physically went to where they lived and spoke in language that they would relate to. When in Capernaum to call Peter, Andrew, James, and John to be his apostles, Jesus didn’t use the language of a carpenter from Nazareth; he used the language of a fishermen.

“He doesn’t say ‘Let us lay down the foundations of God’s reign.’ That’s what a carpenter would say. He says to the two fishermen, ‘Come after me and I will make you fish for people,’” said Father Martin. “So, if the church wants to really speak to and welcome LGBT people, it must be attentive to the language of the catechism.”