skip to main content
Return to Fordham University
You are at:Home»Inside Fordham»Lectures and Events»At Sustainable Cities Conference, a Glimmer of Hope
Photos by Christ Taggart
In his keynote remarks at the opening ceremony for the International Conference on Sustainable Cities on May 1, Steve Cohen, Ph.D., senior advisor, Columbia University Earth Institute, said he believes that humans will learn from their mistakes and reverse course on polluting the environment.

“The human species is ingenious and not suicidal,” he said at the event, which was hosted by Fordham, Columbia University, and NYU.

Cohen, author of The Sustaibable City (2017), noted that the growth of the GDP and pollution corresponded in the U.S.; both rose at the same rate until the Environmental Protection Agency was created in 1970. He said it would take another decade from then before the effects could be seen, but after 1980 there was “an absolute decrease” in pollution.

Throughout much of Cohen’s talk, he buttressed his belief that humankind will move toward a cleaner environment with an argument that the free market will provide the impetus.

He used the Hudson River as an example of how environmental regulations alongside public pressure and private investment can help resuscitate a damaged resource. Up until 1984, New York City dumped raw sewage into the river.

“There’s a reason why Riverside Drive is far from the river,” he said.

But as city, state, and federal government spent billions on cleaning up the Hudson and surrounding waterways, real estate developers moved their projects closer to the river. Today, some of the most desirable real estate in New York sits along waterfront, something that was unimaginable 30 years ago. Likewise, other international cities are competing to clean up. 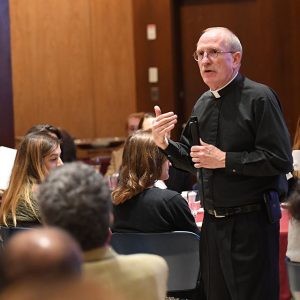 “Cities are in global competition for people and business,” he said. “If I got off the plane and the air is bad, I’m not bringing my family there.”

He said that Beijing, which is notorious for its smog, is under tremendous pressure to cut pollutants. And while there’s currently a debate in the United States about the science of global warming, he said there is little debate about living in clean environment.

“As Mayor LaGuardia once said, ‘There’s no Republican or Democrat way to pick up the garbage,’” he said.

Cohen also said consumers can and do force manufacturers and government to come up with more efficient, cleaner solutions. He noted that once young consumers realized that their Apple products contained poisonous materials, the company pressured its engineers to design less toxic products.

“We have to turn our organizations into sustainable organizations,” he said. “McDonald’s has hundreds of people working to reduce their environmental impact.”

He said young people understand the risks associated with living in an unsustainable environment and consuming for the sake of consumption isn’t what it used to be.

“Part of the sustainable lifestyle is more about physical fitness and wellness, not going to the mall,” he said. “People are paying attention to their health and that’s a huge industry.” 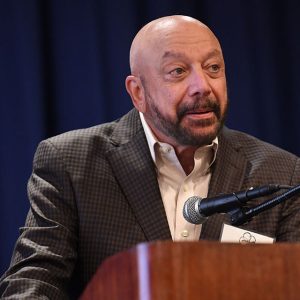 He said millennials’ embrace of the shared economy has also led to decline in consumption, with auto ownership down for those under 25, many of whom choose Uber over a new car. He noted that Rent the Runway, a company that rents designer clothes, allows consumers leave a smaller clothing footprint by renting and not buying.

“I’m not saying we don’t have people like the Kardashians, but if you look at young people today, we’re starting to see a change,” he said.

To be sure, much work and research needs to be done. Cohen said that more people live in cities than in rural areas for the first time in history. And to build sustainable cities, city dwellers will need technology to improve old systems, from water to waste disposal to transportation and, especially, food. Cities are a part of the “world-sourced food economy,” which he labeled a “ferocious business,” adding that farms are essentially factories that pollute as much as any industry. But as with other industries, he said, human ingenuity will find efficiencies.

“When you think of water, technology, and air pollution control, many of them are improved and will continue to improve over our lifetime,” Cohen said. He later added, “It’s a kind of mindfulness; that’s not to say we don’t see mismanagement … we’ve seen disasters, but they have tremendous teaching power.”