skip to main content
Return to Fordham University
You are at:Home»Inside Fordham»Lecture Leads to Schism Between Psychological Heavyweights 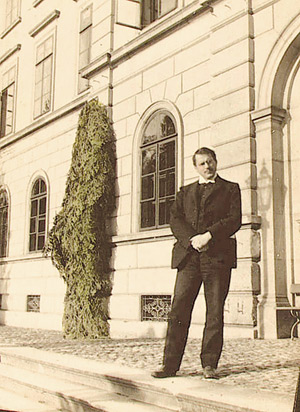 Carl Gustav Jung is pictured standing in front of a building in Burghölzi, Zurich, Switzerland.

In September 1912, a defining event in the history of psychoanalysis took place at Fordham when Carl Jung delivered a series of lectures at the campus in the Bronx.

Jung came to Fordham as part of a broader United States tour. He received an invitation to speak from James Walsh, dean of the Fordham medical school, who was trying to raise its profile by bringing a dozen international scholars to the school that fall.

At Fordham, Jung made a decisive break with his colleague Sigmund Freud, rejecting his broad application of sexuality to the explanation of human behavior. Pleasure is not synonymous with sexuality, Jung argued, disputing Freud’s concept of infant sexuality and redefining the concept of libido. He also diverged from Freud by locating the source of neurosis in the present, not the past.

When Freud wrote to Jung to welcome him back to Europe, he abandoned his earlier salutation, “Dear Friend,” and instead wrote, “Dear Dr. Jung.”