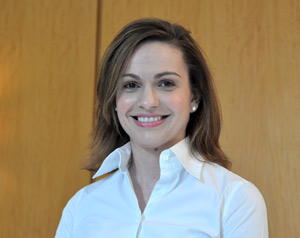 Elizabeth Cosenza, J.D., says that allowing shareholders to nominate their own board candidates will help reduce corporate fraud.
Photo by Janet Sassi

What constitutes corporate securities fraud, when is it recognized as fraud by investors, and who ultimately is liable for it?

These and other securities law questions inspire the scholarship of Elizabeth Cosenza, J.D., assistant professor of law and ethics in the schools of business and author of several articles examining contemporary business fraud controversies.

For almost five years, Cosenza, FCRH ’98, had an up-close view of the world of securities as an associate securities lawyer at Davis Polk & Wardwell LLP, one of the world’s top corporate law firms.

With leading financial institutions such as J.P. Morgan for clients, Cosenza gained on-the-ground experience in preparing disclosure documents and doing mergers and acquisitions before turning an eye toward university teaching and research. Now she is focused on how legislation and court cases affect victims of corporate fraud—at a time when high-profile fraud cases such as the 2001 Enron bankruptcy and the 2007 subprime mortgage debacle have led to public cynicism and a victim’s sense of futility.

“Given everything that has happened with these massive high-profile frauds and the financial crisis, it has not been a very good environment for ordinary investors,” Cosenza said.

“Some companies make opaque disclosures. On top of that, many investors are unsuspecting even though they are investing money in the stock market that they need in the short term,” said Cosenza, who holds a law degree from Harvard.

Currently, however, there are a couple of proposals before Congress that may have a more “democratizing” effect for shareholders. There also are proposals to broaden the ability of investors to bring securities fraud claims under Section 10(b) of the Securities and Exchange Act of 1934 (which prohibits an “act or omission resulting in fraud or deceit” in the sales of any security).

Cosenza noted also that, since the Enron scandal, the Supreme Court has been more inclined to accept cases relating to securities fraud claims.

Last month, the court decided Merck v. Reynolds—a securities class action suit brought by shareholders suing the maker of the painkiller VIOXX for not being forthcoming about the drug’s risks. In a unanimous opinion, the court somewhat relaxed the statute of limitations that shareholders must comply with when filing a lawsuit against a corporation for fraud.

“The Merck decision allows investors to go forward with their lawsuit,” said Cosenza, “and may benefit other investors in their suits as well.”

Another issue—that of who can serve on corporate boards—is before the Securities and Exchange Commission and Congress, and may result in legislation that helps prevent corporate fraud.

In an article that appeared in the Brigham Young University Law Review, “The Holy Grail of Corporate Governance Reform: Independence Or Democracy?” Cosenza essentially chose democracy over independence in the quest for an ethical board.

“The New York Stock Exchange and NASDAQ have independence rules that require the majority of a board of directors to be ‘independent,’ i.e., without any material, financial, consulting or familial ties to the company,” Cosenza said. “But the issue is that if you want to be re-elected to the board, you are very much beholden to management because they nominate the members.”

A better structure, she said, is to allow shareholders to nominate their own board candidates for the election process. Currently that is difficult, but the SEC has proposed making it easier for shareholders to put forward their own nominees and to oppose management’s nominees by expanding the availability of exemptions from proxy rules. Likewise, the Congress is working on corporate governance legislation strengthening the position of shareholders.

“If we democratize the process more, perhaps corporate fraud won’t occur as much,” Cosenza said. “Shareholders who have a financial stake in the company will be more involved in the process and in a position to oversee what is happening within.”

She applied and got the job.

“It was tough, teaching a night class at Rose Hill for a full semester, while working 60 to 70 hours a week at the firm,” Cosenza recalled. “Many times, I left Rose Hill at 9:15 p.m. and then took the Ram Van back to the office to finish up my legal work.”

But teaching appealed to the corporate lawyer, and when a full-time faculty position opened up, Cosenza was chosen. Today, her teaching focuses on business law.

“At the end of the semester, when my students have learned to use the appropriate legal terminology in the right context, it makes me proud,” Cosenza said. “I was in their shoes not that long ago, and it is rewarding to now appreciate the other side of the classroom.”

Lastly, Cosenza enjoys the chance afforded faculty to research and to write.

“I love the scholarly aspect of teaching,” she said.

Cosenza’s next article, “DURA-tion: A New Paradigm for Construing the Statute of Limitations in Securities Fraud Class Actions,” will be published in The Baylor Law Review next year.