skip to main content
Return to Fordham University
You are at:Home»Inside Fordham»Law School Initiative Reaches Out to Artists and the Public 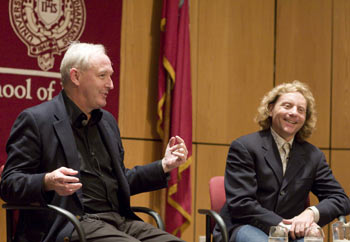 Author Christopher Buckley (left) and Thane Rosenbaum, J.D., John Whelan Distinguished Lecturer of Law at Fordham, at the October screening of Thank You for Smoking, based on Buckley’s novel.
Photo by Nancy Adler

Ask Thane Rosenbaum, J.D., the John Whelan Distinguished Lecturer of Law, what links them together and he’ll tell you that they’re artists who have been drawn in one way or another to make a statement in their fictional worlds about the law and its injustice.

He will also tell you that there is another fact that binds them: Over the past year, all of them have engaged the public about the law and their creative work as part of a unique Fordham Law School initiative known as the Forum on Law, Culture and Society.

“We set up the forum with the view toward it being a public entity,” said Rosenbaum, who is the forum’s director. “It’s not necessarily intended to be for lawyers or for law students. It really is a statement that the Law School recognizes its public function and the public’s obsession with all things connected to the legal system, and so we now offer the public an opportunity to engage in wide-ranging conversations about the relationship between the legal system and the artistic imagination.”

The forum, brainchild of William Treanor, J.D., dean of the Fordham Law School, has emerged in its second year as a chatty, sometimes funny and often illuminating locus for artists and intellectuals to discuss their work. Think of it as a cross between The Charlie Rose Show and Inside the Actor’s Studio.

In fact, the forum has even created a little controversy of its own.

Its first major event in January of 2006 featured E.L. Doctorow and Tony Kushner discussing Julius and Ethel Rosenberg, who were convicted of spying for the Soviets and executed in 1953. Doctorow based a novel on the case, The Book of Daniel (Plume, 1996), and one of Kushner’s protagonists in his Pulitzer Prize-winning play Angels in America is Ethel Rosenberg.

Not only did the session draw coverage in the New York Times, but the Wall Street Journal editorial page ran an op-ed article just days after that, among other things, took the forum to task for hosting a session on two convicted spies. Rosenbaum welcomed the media flare-up.

He disagrees with the premise of the column in theWall Street Journal. The point was not to glorify or exonerate the Rosenbergs, but to understand why they and their case remain fascinating to artists more than 50 years later. Nonetheless, the discussion had clearly seeped into the larger culture, signaling to Rosenbaum that the Forum on Law, Culture and Society had arrived.

“What this shows,” he said, “is that [the forum]has a relevance to the community that is very different from how law schools normally define themselves.”

In the future, Rosenbaum hopes to broaden the forum’s focus beyond writers, playwrights and filmmakers. He’d like to involve poets and composers, and he said there’s even been some consideration of approaching the Julliard School about developing a musical composition based on a widely known trial or event with a legal dimension.

“If someone had a ballet that was, say, inspired by the trial of Sacco and Vanzetti, we would want to stage it,” he said. “If somebody did a chamber piece about the execution of Leo Frank, we’d like to present that along with a post-concert conversation, which is really the core of the forum experience.”

The forum already has signed Time Warner and HBO as corporate sponsors and has formed a partnership with the 92nd Street Y. And in a first for a law school, the forum in October launched the Fordham Law Film Festival, seven nights of movies with a legal theme. The films ranged from 12 Angry Men to The Verdict, and guests included the U.S. Department of Justice’s chief Nazi hunter, Eli Rosenbaum, who participated in a discussion with theater-goers after the screening of Judgment at Nuremberg.

For his part, Rosenbaum is pleased with how the forum has evolved in a short time and the large crowds it has drawn to its various events. He is convinced that it will continue to grow because, he said, the public’s appetite for depictions of the law and justice, from Law & Order to Presumed Innocent and beyond, is virtually insatiable—and that hunger won’t go away anytime soon.
See the article on Scott Turow, “Turow at Law School Forum: Notes from Left-Handed Lawyer.”