skip to main content
Return to Fordham University
You are at:Home»Inside Fordham»Law Professor Trains Eye on Evolution of International Governance 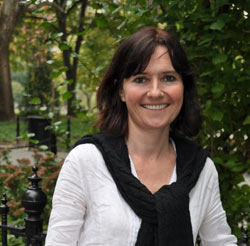 Gráinne de Búrca says that although in theory every member of the WTO has an equal voice in the organization, this is far from true in practice.
Photo by Patrick Verel

Gráinne de Búrca’s worldview expanded when she moved from Ireland to mainland Europe, and then to the United States. So, too, has her interest in issues of governance expanded, such that de Búrca, a professor of law, now writes increasingly about international and transnational governance.

It is a timely subject, because as the development of the European Union (EU) and recent events in the global economy have shown, the era of independent states that can act purely in their own self-interest and regardless of the impact on others is over.

International institutions such as the United Nations, World Bank and World Trade Organization (WTO); more recent transgovernmental networks such as the Group of 20 (G20); and the growing number of regional organizations such as the EU, Association of South-East Asian Nations (ASEAN) and the African Union are more important than ever, according to de Búrca.

“The phenomenon of governance escaping the state is really what interests me,” she said. “Although the growing interdependence of states requires transnational governance solutions, there are problems of legitimacy and effectiveness. People are deeply suspicious of what they perceive as faceless bureaucrats and elites.”

De Búrca came from the European University Institute in Florence, Italy, to the Fordham School of Law in 2006. She is currently working out of an office on Washington Square Park in Manhattan as part of a yearlong fellowship with the Straus Institute for the Advanced Study of Law and Justice at New York University. The institute’s research theme this year is “the turn to governance in international law,” which de Búrca said may seem obscure, but is a phenomenon with many practical consequences.

“International law is a traditional and old-fashioned discipline in some ways, and has not fully adjusted to the rapidly changing global environment,” she said. “But the discipline has begun to change, and to reflect some of the major changes that have taken place in the international environment over the last half-century or so, with even greater intensity in recent decades.

“There has been a turn away from traditional international legal mechanisms and diplomacy, and a rise in novel forms of ‘global governance.’ This term includes all kinds of patterns of transnational policy-making and lawmaking involving different groupings and networks of actors, both public and private,” she said. “The picture is much more fuzzy, complex and opaque than the traditional realm of international law, which was composed primarily of sovereign states interacting amongst themselves.”

Having spent the last few years examining how the 27-member European Union works to address issues such as trade, social policy, anti-discrimination and anti-terrorism issues in her papers, including “The European Court of Justice and the International Legal Order after Kadi” (Harvard International Law Journal, 2009), de Búrca is now examining how the EU is influencing the international legal realm as an emerging global actor.

For example, she cited the fact that the EU had, for the first time, participated in the negotiation and signing of an international human rights treaty, the U.N. Convention on the Rights of Persons with Disabilities, which was recently adopted by the United Nations General Assembly. Unlike previous U.N. human rights treaties, this one was negotiated with the strong participation of organizations representing people with disabilities, and other non-governmental organizations, and contained several novel features that make it a promising instrument for delivering the social change that is needed.

Some of these features—including the strong participation of key “stakeholders” in many aspects of policy-making—are a familiar part of how the European Union operates in its internal domain.

“Because the EU has to coordinate the different interests of so many states and actors, and has created new institutions to shape policy for 27 member states, much of its policy-making is quite strongly participatory in interesting ways, and is not exclusively confined to formal state representatives, parliamentarians or foreign office officials,” she said. “The EU frequently relies on and works through networks of stakeholders, involving the actors who are likely to be most affected by the policies in question.”

Another example of an arena in which de Búrca said the EU has recently been making its voice heard is the meetings of the G20. At its September summit in Pittsburgh, the group—which represents finance ministers and central bank governors from the world’s 20 largest economies—in an attempt to respond to the growing economic interdependence of states in the global economy, agreed to establish a system of “peer review” of each other’s economic policies. While new to the international realm, such a system of economic peer review is a familiar tool of internal EU policy.

“It’s a potentially radical idea if you take seriously the notion that states, which conceive of themselves as sovereign entities, have agreed to open up their economic polices to one another for scrutiny and comment,” she said.

It’s a tricky proposition that involves balancing states’ concerns about their sovereignty with their need to cooperate. But the trade, environmental and economic interdependence of states is increasingly evident and conflicts are inevitable.

“These international trade rules are set through the WTO, which is another organization whose legitimacy is regularly called into question,” de Búrca said. “Theoretically, every state that is a member of the WTO has an equal voice, but in practice this is not at all the case. Proceedings are very much dominated by a small group of economically powerful states; many developing countries struggle to send negotiators and to be able to participate in meetings.”

De Búrca sees her role as a cheerleader for democratic and other reforms within transnational governance, which are gradually becoming more open to such reform in part because their very legitimacy depends on it. The kinds of public protests that now regularly accompany the meetings of political and economic leaders such as the G8, G20, WTO and World Economic Forum illustrate why such changes are necessary, she said.

Even in Europe, the Lisbon Treaty, which would have made significant amendments to the European Union’s founding treaties, was initially rejected by a popular referendum in Ireland in 2008, before being accepted last month in a second referendum held at the urging of the EU’s political leaders. The intense public interest in that process and the lively debate which the two referendums generated is part of what makes de Búrca optimistic that more democratic mechanisms of governing will gradually be embraced.

“The process of opening borders and states to one another, and reducing the barriers between them, is a positive development. It’s, of course, in some respects a frightening one for many people, since globalization brings with it all sorts of perceived threats and fears and anxieties, but it’s also a cause for optimism and hope,” she said.

“If you want to see the simplest example of this lesson in Europe, it’s that it is almost impossible now to imagine any one of the 27 member states being at war with one another again. And as the EU ambassador to the U.S., John Bruton, recently noted, not a single person has died in the creation of the European Union, something that cannot be said of the process of coming into being of many nation states. That, in and of itself, is a significant achievement.”