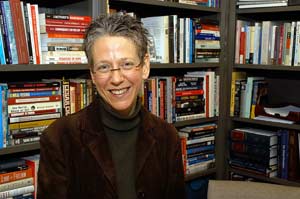 Jennifer Gordon has proposed a program to assist undocumented workers while strengthening the U.S. labor force.
Photo by Ken Levinson

There’s a lot of posturing among politicians about immigration reform, especially in this election year. While politicians seem content to offer lip service on the effects of undocumented foreigners clogging a souring American job market, Jennifer Gordon, associate professor of law, is ready to act.

Gordon, who has spent her adult life working for the rights of undocumented laborers, proposed a “transnational labor citizenship” program last year in an article in the Southern California Law Review. The idea entails the creation of cross-border workers’ organizations, much like unions, through which workers in one country legally sign up to work in another country. In exchange for receiving an education in workplace rights, help defending those rights and a temporary work visa, laborers would pledge not to work for substandard pay or undercut other workers in any way.

In addition, the program would monitor for unscrupulous employers and ease the way for transnational workers to travel between their host country and home country.

“Our nation’s use of immigrants as a low-wage labor force is not an accident; it’s a confluence of many, many things,” said Gordon, author of Suburban Sweatshops: The Fight for Immigrant Rights (Harvard University Press, 2005). “You can shape immigration and you can control it some, but you can’t stop it. People are still going to come. Politicians would rather sell the fantasy that ‘We can hold them off’ through a border wall, but in truth they would accomplish much more by structuring immigration policy in a way that reinforces the basic workplace laws of our nation.”

Gordon is one of those individuals whose social justice work has made a palpable difference in the lives of the poor and exploited. In 1992, just out of Harvard, she founded a non-profit rights center in Hempstead, N.Y. called The Workplace Project, a membership organization for immigrant workers—primarily Hispanics—typically working as kitchen help, landscapers and domestics. She gave classes in Spanish on labor law and helped educate the migrant workers in workplace parity, creating a model for a self-sustaining member organization that thrives today.

Gordon recounted the story of one prep cook who was working 70 hours a week for $2 per hour. When the employer stopped paying altogether, the worker moved into the restaurant and slept on site, working on the promise of a paycheck.

“You think of people being paid less than minimum wage, but it was common that people were paid nothing at all,” she said, “[Some] employers sense that if workers are undocumented, they can be abused with impunity.”

In 1997, Gordon and her group were instrumental in the passage of New York state’s wage enforcement law, one of the toughest in the nation. The law requires an offending employer to pay interest and civil penalties of up to 200 percent of unpaid wages, in addition to the original underpayment. For her efforts, Gordon received a MacArthur Fellowship “genius grant” in 1999.

While Gordon said she feels empathy for immigrant workers who come to the United States for a better life, she knows it creates a domestic dilemma. “I see the U.S. workers’ concerns, particularly those in low-wage industries, who feel that more immigrants bring more competition and worsening working conditions,” she said. “But if immigrants do not have rights in the workplace, they are a far greater threat to working conditions than if they do have rights.”

In unity, Gordon said, both groups will strengthen workplace standards.

To the many skeptics of her plan, Gordon points out that unions and non-profit organizations in other parts of the world have begun to collaborate across borders to ensure that migrants’ rights at work are respected. Some sending country governments have also begun to take an active role. The Philippines, one of the largest sending nations in the world, is one example. Like Mexico, the Philippines is dependent on its own migrants for income, Gordon said. To support such migrants, the government has created the Overseas Workers Welfare Administration (OWWA), an agency of the Filipino Department of Labor and Employment. OWWA is tasked with protecting the welfare of overseas Filipino workers and their dependents. The agency offers training, loans, insurance and rights education to Filipinos before they ever step foot in a foreign country.

“Both cross-border organizing and state action to defend migrants rights is much more developed in Southeast Asia, for example, than in the United States,” said Gordon, who admits that the U.S. government, riven by special interests and political bickering, is not ready to sanction a pro-undocumented worker program anytime soon (and especially not in an election year).

A more likely scenario, she believes, is that a pilot project could be created through collaboration between existing workers’-rights organizations in one region of Mexico and one part of the United States to form a budding transnational link.

Last September, Gordon received a two-year grant from the Ford Foundation to further research and draft proposals for the transnational project. She also is working on a project with co-worker Robin Lenhardt, associate professor of law, on African Americans and immigrants’ co-existence in the workplace.

“I believe in the human right of movement and the right to seek work,” Gordon said. “And I deeply believe in the contributions that immigrants make to our society.”