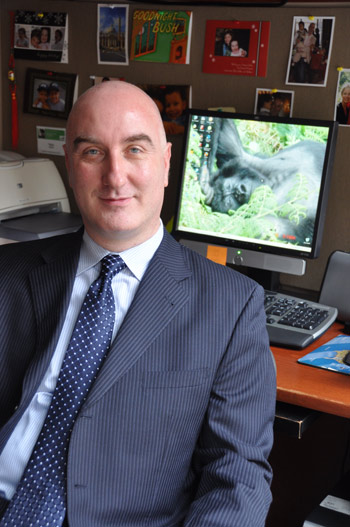 Paolo Galizzi, Ph.D., says wealthier nations have a greater responsibility to promote sustainable development. But all nations, rich and poor, must work together to preserve the planet.
Photo by Janet Sassi

A multinational corporation opens a factory in a developing nation and causes an environmental catastrophe. Think Union Carbide’s 1984 gas leak in Bhopal, India, which killed at least 4,000 people, or Chevron/Texaco’s decades of oil exploration and extraction in Ecuador that blighted the pristine rain forests.

Paolo Galizzi, Ph.D., clinical associate professor of law and director of the Sustainable Development Legal Initiative (SDLI) at Fordham, has an interest in preventing such scenarios. He is focused on using international law to ensure that environmental protection, development and human rights go hand in hand to promote a sustainable future.

“Globalization in itself is neither good nor bad for human rights, the environment, or poor people,” said the Milan, Italy-born professor, who holds a law degree, a master’s degree and a doctorate in international environmental law.

“Legal rules are integral to determining whether globalization can produce positive outcomes,” he explained. “International regulation, more specifically, can influence the direction of globalization and make it a positive force for the poor, human rights and the environment.

“Too often, environmental protection and development measures designed to alleviate poverty are cast as opposing goals,” he continued. “In my view, they are two sides of the same coin. We must try to promote them at the same time.”

In founding SDLI, Galizzi, who has published extensively in international law and is the editor ofPeople and the Environment: The Role of Environment in Poverty Alleviation (Fordham University Press, 2008), set up a legal research center within the Leitner Center for International Law and Justice that combined his interest in development, the environment and human rights issues.

A human rights-centered approach to development, Galizzi said, is crucial to promoting truly sustainable development. Such an approach requires policy makers and lawyers to base their development policies and practices on respect for, and compliance with, international human rights instruments.

“Poor communities the world over rely heavily on nature, making measures to protect the environment essential for preserving the resources on which we all—particularly the most vulnerable—depend,” he said. “At the same time, conservation schemes, to be successful, should provide economic benefits for local communities.”

One example of sustainable development is the International Gorilla Conservation Programme, through which communities in the Democratic Republic of Congo, Rwanda and Uganda have embraced an eco-tourism industry promoting the conservation of mountain gorillas. Profits are shared among the communities, Galizzi said, thus dissuading the environmentally irresponsible and illegal practice of gorilla poaching.

“It is difficult to ask the more than 1 billion people who live on less than a dollar a day not to use the resources around them for their livelihoods,” he said. “What we can do is help them use resources in a sustainable way.”

Galizzi’s interest in development, human rights and the environment started early in his legal education and strengthened while he was teaching at the University of Nottingham in Great Britain more than a decade ago. On his first trip to Africa, Galizzi witnessed extreme poverty in Ghana and saw the potential for international law to have a meaningful impact on everyday people.

“I asked myself, how could I get a woman who lives in a remote village in Ghana, illiterate, living on almost nothing, to benefit in some way from, for example, the International Convention on the Elimination of Discrimination Against Women?” Galizzi said. “What do all these rules designed to promote gender equality mean for a poor person with no means to know about her rights, let alone enforce them?”

The same holds true for international environmental law. Ensuring that conservation efforts preserve and promote the rights of those who rely on the environment is vital to achieving development that is truly sustainable, not only environmentally, but also financially, socially and politically.

“The world’s poor pay the highest price for environmental pollution and have the fewest resources to combat it,” he said. “Legal mechanisms do not mean anything if they don’t improve the lives of those they are trying to help.”

Working to strengthen awareness and protection of people’s rights and promote sustainable development has become Galizzi’s focus. The key, he explained, is encouraging all concerned parties to capitalize on what each brings to the table: their needs, aspirations and experiences. This holds true from grassroots projects to international negotiations between countries.

“We all have a role to play,” he said. “As private individuals, we can practice and support environmentally and socially responsible choices and call on political representatives to promote solutions that maximize benefits for the poor and the planet.”

In the international environmental context specifically, such opportunities abound. “Working together, developed and developing nations can establish markets for preserving natural resources. Our atmosphere, oceans, and land provide numerous benefits of financial value,” Galizzi said. “We just need to find ways to price these global assets so that their true worth can be measured and their conservation funded.

“We have been accustomed to treating the environment as a free good. We enjoy its benefits often without thinking about the environmental consequences of our actions.”

Galizzi posed a soul-searching question: If you had the option to pay a $60 fee when you fly to reduce your environmental impact and partly cover the cost of offsetting fossil fuel emissions, would you pay it?

“If people in our position don’t make those choices, can you imagine asking people who don’t have that $60, or who cannot even get on a plane to begin with, to change how they live?” he asked. “We need to start thinking about the ‘price’ we put on the environment to limit our impact, or at least to fund measures to reduce, prevent and minimize it.”