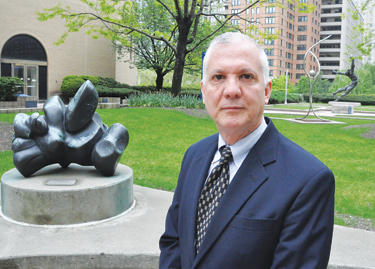 Hector Lindo-Fuentes’ home may be in the United States, but in many ways, his heart is still in El Salvador. It is there that Lindo-Fuentes, Ph.D., professor of history and Latin American studies, was born and raised.

And it is there that he’s invested countless hours to help rebuild its educational system, after the country emerged from a 12-year-long civil war in 1992, as a past member and president of the seven-member national commission for accreditation of higher education institutions.

His most recent contribution is Modernizing Minds in El Salvador: Education Reform and the Cold War, 1960-1980(University of New Mexico Press, 2012). The book, which follows six other books that Lindo-Fuentes has written on El Salvador, details the spectacular failure of the country’s attempt to overhaul education and embrace modernity.

He was drawn to education reform in part because he graduated from high school at the height of the debates surrounding it.

Lindo-Fuentes had originally believed that the educational reform centered around a drive by Walter Beneke, El Salvador’s former ambassador to Japan, to carry pre-recorded lessons into classrooms around the country via television. But when he began researching the topic through the archives of the U.S. Agency for International Development, he realized there was more to the story.

“It turns out the story was completely different,” he said. “It was very much tied to the Cold War, and to very different characters.”

In addition to Beneke, Lindo-Fuentes found that he needed to include in the story the contributions of Wilbur Schramm, an American advocate of televised education, who had connections with the United Nations, via UNESCO.

Schramm’s views were aligned with those of President Lyndon Johnson’s administration, which believed that an accelerated process of modernization through channels like educational television was necessary to prevent the rise of communism. At the time, the Soviet Union was promoting its ideology in South America, which made the U.S.-allied Salvadoran government wary.

But the education reforms failed. One reason was that although students found the televisions fascinating, the classroom teachers who were told to operate the televisions found the experience humiliating, because their students quickly deduced that they were less knowledgeable and charismatic than their television teachers.

Worse yet, Lindo-Fuentes noted that television was a poor substitute for real-life interaction.

“Because there was very little interaction, it was very easy to tune out. The broadcast class also had its own rhythm, so it didn’t matter if students were understanding the lesson or not. Some students were faster; others were slower. If you got lost, you got lost,” he said.

When the teachers’ unions started protesting the new system, the conflict mushroomed into something much bigger. Union leaders charged that the government was spending too much on technology at the expense of actual human capital.

“This is a very powerful political message, and this is the middle of the Cold War. It’s a United States-sponsored project, with a lot of money and a lot of technology. For the government, any teachers who opposed this fantastic, modernizing approach to education had to have nefarious reasons to do so,” Lindo-Fuentes said. “They had to be communists, and so they had to be repressed.”

Lindo-Fuentes does give the government at the time credit for putting resources into education, but notes that its unbridled faith in technology, along with the outside political and economic pressures, caused its demise.

“Any education reform is going to be part of some kind of tug-of-war. You see it in the United States as well; people care about what their kids are going to learn in school. It’s about their idea of what America should be like,” he said.

In addition to examining the past, Lindo-Fuentes is still very much involved in the present. He will be traveling to El Salvador in July to take part in a government-sponsored study group that will identify the challenges that face higher education in the country. It’s a process he was involved in from the start, and there’s still a long way to go toward building institutions and introducing practices that provide people with more opportunities to educate themselves.

At times, said Lindo-Fuentes, he feels guilty about not being there.

“But what I found is, being away and having a distant perspective, and living through the education system in the U.S., gives me the opportunity to see both realities and see how to bridge them,” he said.

“I’m not going there [with the]ambition to make something of myself in the system over there, so [I have] a little more freedom to talk to everyone . . . as long as it has to do with constructive things like education.”