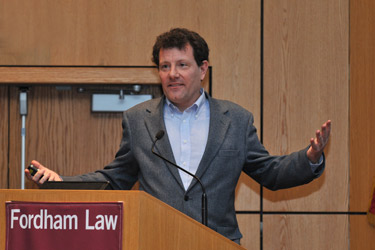 Journalist Nicholas Kristof says an increase in education and microlending to women in developing nations is helping fight poverty and discrimination.
Photo by Ben Asen

In the 19th century, the central moral challenge was slavery; in the 20th century, it was totalitarianism; but in this century the issue dominating moral debate is gender inequity, journalist Nicholas Kristof said at Fordham Law School on Feb. 22.

At an event sponsored by Fordham’s Leitner Center for International Law and Justice, Kristof and his wife, Sheryl WuDunn, showed slides of extraordinary women from developing countries who have transformed their lives through international aid and intervention. The Pulitzer Prize-winning pair have traveled around the world to uncover and publicize human rights abuses. Recently they collaborated on Half The Sky: Turning Oppression into Opportunity for Women Worldwide (Knopf, 2009), a series of firsthand accounts of women they have encountered in their research.

One story involved 13-year-old Cambodian Long Pross, sold into sex slavery, her left eye mutilated by the brothel owner when she would not have sex following a forced abortion. Pross was rescued by a trafficking survivor who had herself been rescued by a survivor.

Another teenager, Srey Neth, was bought out of sex slavery by Kristof for $150 and returned to her family; she went on to become a successful grocery store owner in her village.

WuDunn relayed the plight of 14-year-old Ethiopian Mahabouba Muhammad, whose obstructed labor from a rape left her incontinent and ostracized from her village. The homeless teen was rescued by a missionary after she was attacked by hyenas. Today, she is a nurses’ aide at Adis Ababa Fistula Hospital.

These accounts and others, Kristof said, are examples of “the brutality inflicted routinely on women and girls,” particularly in developing nations. He offered staggering statistics on women and mortality: while the ratio of men to women appears to be higher in many nations (107 men to 100 women in China; 111 men to 100 women in Pakistan), it is because more women are allowed to die or are killed. In India alone, Kristof said, by age five girls experience a 50 percent higher mortality rate than boys.

“In much of the world, [gender]discrimination is legal,” said Kristof, “If you don’t have enough food, you starve your daughter and you feed your son. If a son is sick, you get a doctor; if your daughter is sick, you feel her forehead and say we’ll see how you do tomorrow.”

And yet, he said, investing in women pays off in both generational and economic capital because women are more likely than men to share earned wealth with their communities and to invest in the well-being of children.

“A dirty little secret is that an awful lot of suffering is caused by bad investment decisions,” said Kristof, who cited statistics showing that in some countries male-controlled household spending results in only 2 percent of income going to education, compared to 20 percent on disposable items such as alcohol, tobacco or prostitution.

An increase in both education and in microlending to women in developing nations, he said, is already helping fight poverty and discriminatory practices.

“The greatest unexploited resources that poor countries have aren’t gold or diamond mines,” he said. “It’s their female population and female enterprise.”

Following the event, the authors chatted with attendees and signed copies of their books, which had been purchased and donated in advance for students by James Leitner (LAW ’82).

Kristof and WuDunn received a Pulitzer Prize for international reporting in 1990 for their coverage of student protests in China’s Tiananmen Square. Kristof received a second Pulitzer in 2006 for his New York Times columns.