skip to main content
Return to Fordham University
You are at:Home»Inside Fordham»Klein: Digital Technology Most Important Innovation Since Printing Press 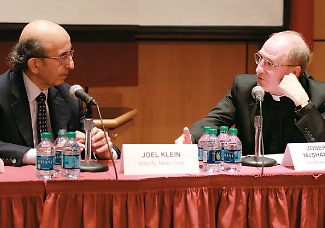 The talk took place on Oct. 15 as part of the Graduate School of Business Administration (GBA) Business and the City discussion series, titled “Growing and Leveraging Tech Disruption” for its focus on tech infrastructure.

Klein, who is now chief executive officer at Amplify, a subsidiary of News Corp that provides digital instruction products for classrooms, called digital learning the “most important innovation since the printing press.”

As the economics of higher education become more challenging, he said, digital learning is a “way to change the game.” He twice cited an online master’s degree in computer science offered by Georgia Tech, in which fees are much lower than those for the classroom version of the degree.

“The difference can be in cost, but it can also be in human experience,” he said. “The big question is how the market will react. Who will IBM hire? A student with online education or the one with the classroom education?”

Klein advocated a cost-effective financial model for degrees that could incorporate a variety of tech innovations, including Massive Open Online Courses (MOOCs). He said that a blended approach in which technology is folded into existing classroom curricula, is gaining traction.

“I can only see good things coming from MOOCs, but they’re only part of the solution,” Klein said. “Tech integration has to be more nuanced than [a]be-all and end-all solution.”

Klein noted that America’s educational institution has a powerful legacy system that resists change, and that educators are understandably anxious that the new technology is asking them to take a leap of faith.

“Many are concerned that we may be throwing the baby out with the bathwater, but they may be clinging too tenaciously to the baby,” he said.

In particular, Klein touted the tablet as a highly personalized tool that can benefit learning in grades K through 12, an area of education that Klein said “has been captured by pedagogy” and where the country’s learning problems are the most intense. Nevertheless, for the tablet to work, he said, the technology must be embraced by the teachers.

He pointed out that New York City classrooms have a very heterogeneous environment in which some students are very ahead and others are very behind. He described several tablet programs designed by Amplify that help teachers differentiate student needs by finding out whether an individual student understands a lesson. The lesson can then be customized, with some of the students moving to the next phase of the lesson, while others who are struggling can receive additional instruction.

Klein allowed that the tablet does have the potential to limit socialization. But, with proper training, teachers would be able to gauge when to use and when not to use the technology, as well as when to simply “shut it down.”