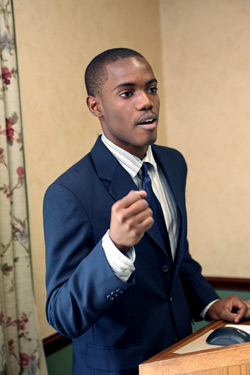 In accepting the Peter Owens Jr. Scholarship, Fordham freshman David Marcelin speaks about Haitians’ need for education, now more than ever, in the wake of this year’s earthquake.
Photo by Bruce Gilbert

About 40 members of Fordham Kiwanis gathered for a luncheon on April 27 as part of “A Day to Remember Haiti.”

During the meal, Fordham Law students Jared Limbach, Ritha Pierre and Robert Cornwall shared their experiences of setting up a day camp program for children in northern Haiti during Spring Break.

Their remarks were accompanied by slides of the children enjoying themselves as part of activities that the law students guided. An important part of their work, they said, was to let the imaginations of the children transcend the tragedy of the devastation all around them.

Each year since 2002, Fordham Kiwanis has awarded the Peter Owens Jr. Scholarship, which is named after an alumnus who died in the 9/11 terrorist attack on the World Trade Center.

This year, Fordham Kiwanis decided to award the scholarship to a Haitian student at Fordham. The recipient was freshman David Marcelin. In accepting the scholarship, Marcelin spoke eloquently of Haiti’s need for education, a need that was present before the earthquake and is even more crucial now. He mentioned that his mother is a teacher in Haiti whose school was destroyed, so he is acutely aware of the problems of education there.

Peter Owens’ father, Peter Owens Sr., and two brothers expressed their gratitude to Fordham Kiwanis for honoring their son and brother through this scholarship. The luncheon raised $500, which was given to the Fordham Haitian Relief Fund established by the University.