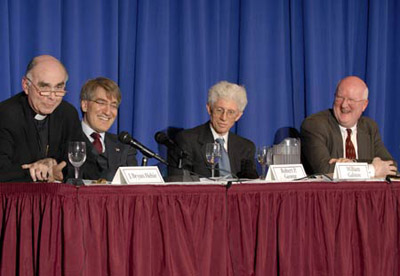 Panelists at the Headline Forum debate the intentions and relevance of John F. Kennedy’s 1960 speech in Houston: From left to right are: Rev. Bryan Hehir of Harvard, Robert P. George of Princeton, William Galston of the University of Maryland and Shaun Casey of Wesley Theological Seminary.
Photo by Leo Sorel

It was widely referred to as his “Kennedy Speech,” but panelists who spoke at a packed Pope Auditorium agreed that in style and substance, the two speeches had little in common.

“Religion and the Race for the President: The Kennedy Moment,” was the latest Headline Forum sponsored by the Fordham University Center on Religion and Culture. For two hours on Jan. 16, author and speechwriter Peter Quinn moderated a wide-ranging and energetic discussion about the relevance of Kennedy’s speech and the role that faith and religion should play in politics today.

“Rather than the opiate of the people, religion has proved an enduring and powerful stimulant, a life-saving antidote to tyranny and nihilism in the eyes of some, a destructive mix of hallucinogens, Viagra and nitroglycerin in the eyes of others,” Quinn said. “Credit it or decry it, religion seems to be doing a lot of things, but disappearing doesn’t seem to be one of them.”

In his speech, highlights of which were shown at the forum, Kennedy insisted that he would base his decisions as president solely on what his conscience told him to be in the national interest, and without regard to religious pressure or dictate.

Panelist Shaun Casey, Ph.D., associate professor of Christian ethics at Wesley Theological Seminary, explained why such a speech was necessary for Kennedy. In the eyes of Protestant leaders, the Syllabus of Errors issued by Pope Leo IX in 1864 formally rejected the notion of a separate church and state, he said.

“Protestants also believed that the 16th-century Doctrine of Mental Reservation empowered Catholics to lie about the truth of these teachings to acquire political power on the part of the Pope,” Casey said.

Echoing the popular Protestant sentiments of the time, he continued, “If you want to want to see what America under a Catholic leader looks like, look at Spain or look at Latin America. That’s the slippery slope we’d go on if you vote for John Kennedy.”

Romney’s speech was not the first since Kennedy’s to tackle the subject, said William Galston, Ph.D., professor at the University of Maryland School of Public Affairs. In fact, Mario Cuomo and Barack Obama have explored where faith belongs in the public sphere. The difference between Kennedy’s speech and Romney’s, Galston said, was that Kennedy advocated the separations of church from state, religion from politics and democracy from God, whereas Romney explicitly rejected the latter two ideas.

The evening’s biggest laughs came during the question-and-answer session, when Galston wondered aloud whether the Catholic bishops who publicly criticized Sen. John Kerry during the 2004 presidential campaign would likewise direct their anger at twice-divorced Republican candidate Rudolph W. Giuliani.

Robert P. George, D.Phil, the McCormick Professor of Jurisprudence and director of the James Madison Program at Princeton University, quickly noted that Kerry was criticized while presenting himself for communion and advertising himself as a Catholic.

“Giuliani seems to be going out of his way to not answer the question whether he is a Catholic and he certainly is not presenting himself. So to me it seems to be a different issue,” he said. “I’d love present you with somebody so we could test the case, but I’m afraid Giuliani’s not your man. It’s like one wag said about Kennedy, you could say the same thing about Giuliani. His position seems to be that his religion is such a private matter, he won’t impose it even on himself.”