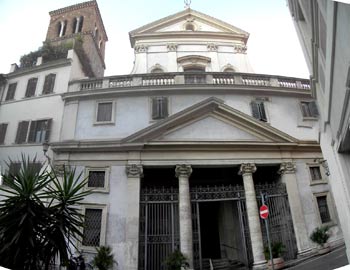 The Church of Sant’Eustachio as it appears today.

On Oct. 28, 1552, at the Church of Sant’Eustachio in Rome, a new school was founded with the aim of revitalizing Catholic ministry in Germany and other parts of northern Europe.

The Collegio Germanico would be run by the Society of Jesus; its constitution and rules had been drawn up by St. Ignatius Loyola, founder of the Society. At first, the college was essentially a residence for students at the Collegio Romano, founded the year before, which was central to the Society’s mission of educating priests and establishing more schools and pastoral missions.

Through its training of pastors, theologians and future bishops, the Collegio Germanico played an important role in restoring Catholicism to many parts of Germany. It also became the model for other national colleges attached to the Collegio Romano and helped establish Rome as the center for clerical training that it remains today.