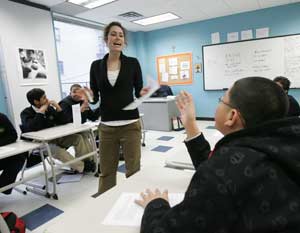 Laura Johnston, a JVC volunteer who teaches eighth graders at St. Ignatius School in the Hunts Point neighborhood of the Bronx, discusses Lent with students on Ash Wednesday.
Photo by Bruce Gilbert

New York City. It’s big, brawling and wracked with confrontation—from a dogfight over a free parking space to a subtle, sour look on the street. One might wonder: If St. Ignatius Loyola had to ride the subway every day, crushed against drowsy commuters and super sized backpacks, would he find God in New York City?

The answer to this question was the core for a talk, “Ruined For Life!” given by members of the Jesuit Volunteer Corps (JVC), as part of Ignatian Awareness Week on Jan. 30 on the Lincoln Center campus. Four JVC volunteers—Steve Ellis, James Ferus, Laura Johnston and William Johnson—shared their stories of finding their spiritual paths as men and women for others in the nation’s largest city.

JVC brings the Peace Corps-type of experience to volunteers, but with a spiritual component. It offers college graduates the chance to spend a year in domestic service (or two years in international service) doing apostolic work in a community through church-sponsored, private and Jesuit ministries. Depending on their skills and interests, volunteers draw assignments as community organizers, teachers, housing advocates, domestic abuse counselors and pastoral lay clergy, among others.

Ellis and Ferus have found a spiritual home through teaching students at Harlem’s Christo Rey Jesuit High School. Johnson, who is bilingual, does service as a paralegal and community organizer for Hispanic street peddlers at Esperanza del Barrio in East Harlem. And Laura Johnston is spending her JVC year at St. Ignatius School in the Bronx, teaching religion to eighth graders.

The volunteers spoke of being called by their faith to do service in New York. Ellis, who graduated from college in 2005, was working in a Cincinnati grocery store where he’d worked all through college.

“Although I loved working there and really connected with the people, my prayer life wasn’t clicking.” Finally, Ellis said, “Somebody told me to stop worrying about what I want do to and start listening to God.”

Johnston, who earned a degree in history from the University of Southern Mississippi, said she originally saw JVC as a “safety net” after college, a place she wanted to go to “give back” for a year of her life before starting out on her career path.

The idea of being “ruined for life,” according to JVC volunteers, means that once you give back, you are never content to settle for a regular job again, and you are restless as long as you see injustice in the world.

“This is now my calling,” Johnston said. “I’m dedicating my life to social justice, to living out a prayer, fulfilling what God wants me to do. I see God in every aspect of my life, and feel God’s love when my students smile back at me or give me a high-five.”

JVC volunteers live together, close to or within the community where they are assigned. The New York group shares an apartment where JVC pays for their room and board. In addition, volunteers receive a personal spending stipend of $85 per month.

“That translates into getting takeout and a beer at the bar about one time a week,” said Ferus, who joined JVC after attending Harvard. “And simple living.”

“It’s so counter-cultural, especially in New York,” Ellis said. “But you stay grounded in what is the point.”

Fordham University has several former JVC volunteers on staff, including Paul Francis, director of the Global Outreach program. Francis worked at Project Lazarus, a New Orleans-based AIDS hospice, in the 1990s. Afterward, he was never content to work just for a paycheck again.

“After I volunteered, I returned having so many questions and no answers,” he said. “I tell the students that when you come back from the trip, that’s when the real journey begins.”