skip to main content
Return to Fordham University
You are at:Home»Faculty Profiles»Jesuit Uses Theatre to Reach Beyond Church Walls

Those who know George Drance, S.J., as a priest are frequently surprised to learn he is an acclaimed actor.

Meanwhile, those who know him as an actor are equally surprised to learn he is a priest. Father Drance, however, views both of his vocations as a very natural means of bringing God’s word to audiences who normally would not seek it out. 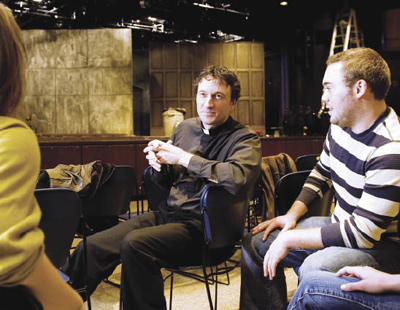 According to Father Drance, who has performed and directed in more than 20 countries on five continents, his two callings are intertwined.

“I’ve actually been in ministerial situations I never would have been in had I not been an actor,” he said, citing an occasion on which a fellow actor, who had been away from the church for 17 years, asked him at the end of their play’s run to hear his confession.

“Situations like that really embody the spirit of the Jesuits, where Ignatius encourages us to use all available means for God’s greater glory and for the salvation of souls,” Father Drance said.

In his case, “all available means” include acting, directing, singing, translating international works, adapting other art forms into theatrical productions, running a theater company and—just as importantly—teaching. He has been an artist in residence in Fordham’s theatre department since 1998 and regularly teaches acting, collaboration, clown and improvisation and a senior values seminar.

His activities of the past semester show the breadth of his scholarly and artistic ministry. At Fordham, he is offering an Eloquentia Perfecta seminar in theatre for first-year students and team-teaching a class on collaboration for theatre majors. In addition, he recently performed at La MaMa Experimental Theater with the Great Jones Repertory Company in a revival of Ping Chong’s dance-theater pieceAngels of Swedenborg.

He also served as a consultant to Discovering Pasolini: Notes on an Unborn Movie, a play about the noted Italian poet and filmmaker Pier Paolo Pasolini. The play was presented in Florence, Italy, by La MaMa Umbria International in celebration of the 150th anniversary of Italian unification. He sang the role of the deacon in a just-released recording of composer Roman Hurko’s new setting of the Divine Liturgy of Saint John Chrysostom, the first version of this Ukrainian Catholic liturgy to use both the words and the rhythms of English.

He has been directing junior and senior high school students from Washington Heights in Sosua, a musical by Tony-nominated composer Elizabeth Swados about Jewish refugees housed by the Dominican Republic at the beginning of World War II. The production is expected to be performed in January at the United Nations.

In addition, Father Drance is looking at developing two works on the inequitable distribution of wealth for the Magis Theatre Company, where he is artistic director. The first, the ancient Greek comedyPlutus by Aristophanes, tells the story of a father who, after realizing the financial rewards of his virtuous lifestyle do not compare to the gains of his scoundrel neighbors, questions the vein in which he should raise his son. The second work, the American melodrama The Poor of New York, written by Dion Boucicault, looks at life amid the financial panics of 1837 and 1857.

Although the two plays were created in 388 B.C. and A.D. 1857, respectively, Father Drance believes they accurately reflect the economic fears and disillusionment that are prevalent today, so much so that “both could have been written yesterday,” he said. In fact, a character in The Poor of New York, sounding much like the pundits of today, likens 19th-century Wall Street to “a perch, on which a row of human vultures sit, whetting their beaks, ready to fight over the carcass of a dying enterprise.”

Father Drance said it is important to bring these works into the public eye now because “we’re at a moment in history where people feel overwhelmed by their circumstances, perhaps alone in their experience of it and without a means of doing something specific or engaging in a kind of discourse that can actually seek specific changes.

“Because of that, we’ve given up striving for any kind of change,” he said. “My hope is that—by pointing out that this has been a constant part of history—we would take courage and rally ourselves to continue to strive for justice.”