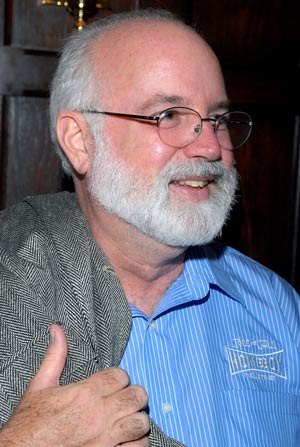 Gregory Boyle, S.J., founder of Homeboy Industries, spoke at “Breaking the Isolation of Gangs” on Oct. 9 at Duane Library.
Photo by Ken Levinson

Gregory Boyle, S.J., visits hundreds of incarcerated gang members in Los Angeles each year, and he always tells them the same thing: “Call me when you get out, right away. If you delay, you’ll get popped again; you’ll get arrested.”

Then he hands them his card.

In the two decades since Father Boyle began working with members of the city’s more than 250 street gangs, he’s given out millions of cards, hoping that the recipients will respond to his promise of employment and a second chance at life.

By any measure, he has succeeded. His efforts have blossomed into Homeboy Industries, an organization that employs gang members in various revenue-generating enterprises. It is the largest gang-intervention organization in the country.

Hundreds of youth have turned away from crime and violence, embraced a positive lifestyle and gone from Homeboy-run businesses to the mainstream workforce, said Father Boyle, who told his stories of helping gang members find new hope in a presentation on Oct. 9 at Duane Library.

The event was sponsored by the Francis and Ann Curran Center for American Catholic Studies.

“God is compassionate, loving kindness, and all we’re asked to do is be in the world that God is,” he told the packed house at the library’s Tognino Hall.

“Our goal is to create a circle of kinship such that God might recognize it, and the only way to enlarge this circle is to stand at the margins with the poor and the disregarded and the powerless,” he continued.

That means whenever gang members want to find honest work, they go to Father Boyle and he sets them up at a Homeboy enterprise, which includes a silk-screening factory, bakery, maintenance company or cafe, or other business that will teach them useful skills.

Not only are the businesses profitable—the silkscreen company, for example, produced revenue of $1.1 million last year—but his efforts are quietly expanding the options for Los Angeles’ roughly 26,000 gang members.

The only stipulation is “no hanging, banging or slanging,” Father Boyle said, referring to the types of criminal activity pursued by gangs.

When things go wrong with his “homeboys” and “homegirls,” as they sometimes do, he presides over their funerals—159 at last count.

He said that success in dealing with gang membership comes from treating it like a drug or alcohol addiction—and by standing shoulder-to-shoulder with them when the rest of society scorns.

He tells them, “You are exactly what God had in mind when he made you.”

“You tell them the truth, and then you want them to become that truth,” he said. “And when they become it, it changes their lives. No bullet can pierce that; no prison walls can keep that out; and even death can not put an end to that.”

Although Father Boyle has received accolades from all corners of society—including First Lady Laura Bush, who invited him and three homeboys to dine at the White House—his efforts continue to be hampered by Los Angeles police.

“What Homeboy Industries does flies in the face of conventional wisdom that says gang members don’t want to work,” he said. “Tell that to the thousands that come to my office.”

He also finds it difficult to qualify for federal funds earmarked for faith-based initiatives, because his message is one of jobs and a new life, not Jesus, church and religion.

“Nobody’s going around here giving a message—they’re becoming that message,” Father Boyle said. “Because Jesus was not a man for others; he was one with others because there was no daylight between him and the people on the margins with whom he chose to stand.”