The winds of change that are buffeting education in the United States were the subject of conversation on Oct. 20 at the Lincoln Center campus. 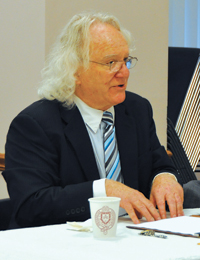 There, the deans of nine Jesuit education schools came together for the annual meeting of the Association of Jesuit Colleges and Universities.

The morning session, which drew administrators from across the nation, addressed the ebbs and flows of enrollment. A common concern was that the value of professional training in education is under assault.

Mark Meyers, Ph.D., dean of the College of Social Science, Health and Education at Xavier University, noted that Ohio’s new governor eliminated the pay raise that teachers traditionally received when they earned a master’s degree. In addition, there are contradictory messages coming from the top tiers of state government about whether there will be more jobs in teaching, he said.

“No one’s going to sign up to take a graduate course if they don’t know whether they’ll have a job,” he said.

Jon Sunderland, Ph.D., dean of the School of Education at Gonzaga University, concurred.

“Our biggest hit—because of state legislation—has been in professional development activities. The State of Washington also took master’s degrees off the payroll increment scale, so people are not looking for master’s degrees; it does them no financial good,” he said.

A recent report by Stanford University that questioned the value of a master’s degree in teaching has done incredible damage, said Shane Martin, Ph.D., dean of the School of Education at Loyola Marymount University.

“All over the country, and particularly in California, folks hold that up and say, ‘Research definitely says that a master’s degree in education doesn’t do a damn thing,’” he said.

“I’d like to see us address that, because our master’s programs do have value.”

On the issue of enrollment, most attendees reported that they had declines this year.

There were some bright spots in the conversations. Michael Pardales, Ph.D., dean of the School of Education and Human Services at Canisius College, noted that counseling programs seemed to be faring well. He suggested that—like their business school counterparts—education schools should emphasize the uniqueness of Jesuit education.

“Having come to Canisius from a state institution, I’ve seen a definite difference in the way we prepare teachers,” he said. “It could be a piece of the overall puzzle of how to leverage our brand.”

Susan Douglas Franzosa, Ph.D., dean of the Graduate School of Education and Allied Professions at Fairfield University, said that tuition increases have had an undeniable effect on enrollment, which surged two years ago, then leveled off, and then dropped this year.

She advocated taking a long view, though, noting that the fortunes of professional schools have always been subject to swings.

“If you think back 15 or 20 years, nursing was having a lot of trouble, but now there are not enough spaces to educate nurses,” she said.