skip to main content
Return to Fordham University
You are at:Home»Inside Fordham»Jesuit Advocates Humor as a Sign of Faith 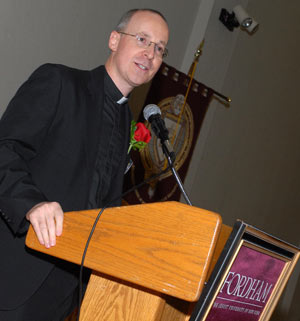 Even Jesus had a sense of humor, according to James Martin, S.J.
Photo by Ken Levinson

Fordham University’s Graduate School of Religion and Religious Education (GRE) recognized those who bring “the salt of the earth and the light of the world” to others on Oct. 16 at the fourth annual Sapientia et Doctrina celebration.

The school honored 11 people and agencies for their excellence in doing the day-to-day work of the church, and bestowed a special Gaudium et Spes award upon James Martin, S.J., award-winning author of My Life With the Saints(Loyola, 2006).

Father Martin, an associate editor atAmerica magazine and media commentator familiarly dubbed the “Colbert Report chaplain” for his appearance on the popular show, spoke to the value of expressing more liveliness and laughter, or “salt and light,” among Catholics today.

“We’ve all met Catholics who seem to think that being religious means being deadly serious,” he said. “But of course, when you’re deadly serious, you’re seriously dead.”

Drawing from his book research, Father Martin gave several examples of saints and popes with a funny bone. In the third century, he said, while being burned to death on hot coals, St. Lawrence called out to his executioners: “Turn me over, I’m done on this side.” Saint Teresa of Avila is purported to have said “I’m more afraid of one unhappy sister than a crowd of evil spirits,” he said.

Archbishop Timothy Dolan was asked following his installation if he was persuaded to condemn anything, which is one of his episcopal rights. He answered “Yes, instant mashed potatoes and light beer.”

Even Jesus Christ had a sense of humor, Father Martin said in his keynote address, noting that scripture scholars doubt that anyone too serious could have recited such clever parables.

Humor, Father Martin said, is both a tool for practicing personal humility and an effective way of showing hospitality to others. Morever, humor can evangelize.

“Joy, humor and laughter show one’s joy in the risen Christ and one’s faith in God,” he said. “A positive outlook shows people you believe in the resurrection and in the power of life over death. Don’t you think that after the resurrection, the disciples were joyful? Joy reveals faith.”

One by one the evening’s awardees were honored in front of a symbolic offering table decorated with candles and a bowl of salt, set up in Rose Hill’s McGinley Ballroom. Honorees include:

• Rev. John P. Duffell, pastor of Ascension parish on W. 107th St., for his work on behalf of the West Side’s poor and homeless;

• Catherine Hickey, Ph.D., UGE ’58, GSE ’83, former superintendent of schools for the Archdiocese of New York, for her work leading the largest Catholic school system in the country;

• Kerry Robinson, founding executive director of the National Leadership Roundtable on Church Management, for promoting best practices in church management and human resource development;
•
Philip Russo, executive secretary of the Paterson, N.J., Secretariat of Evangelization, for his work with Catholic youth and for establishing an endowed fund for education of lay ministry;

• Ann Ulanov, Ph.D., professor at Union Theological Seminary, for her work exploring the intersection of psychiatry and religion.

Two organizations also received the awards: Malta House, a Norwalk, Conn., home for expectant mothers, and the Sisters of Charity, the religious community dedicated to caring for the poor and disenfranchised founded by St. Elizabeth Ann Seton.

All awards were determined by a committee of GRE alumni and faculty, chaired by Michael Hayes, FCRH ’92, GRE ’05.