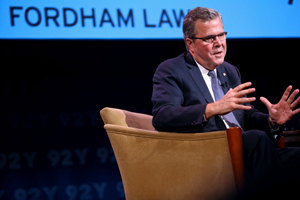 Immigration reform is the key to both the nation’s and the Republican Party’s future, Jeb Bush told a capacity crowd on Nov. 18.

The former two-term governor of Florida made an impassioned plea for immigration reform at the 92nd Street Y, at the Forum on Law, Culture and Society’s latest conversation series.

The Q and A, which took place with forum director and Fordham Law professor Thane Rosenbaum, ranged from education and affirmative action to his older brother George W. Bush’s legacy—and how Jeb got his unique name.

But the main thrust was immigration, which Bush tackled in March 2013 with Immigration Wars: Forging an American Solution (Threshold, 2013), which he co-wrote with Clint Bolick.

Bush said his experience of meeting his wife in Mexico, and converting to Catholicism for her, is an example of how one can benefit from stepping outside of one’s comfort zone and embracing change.

And the need for change in this county’s immigration policies is too great to ignore, he said. The country’s birth rate is dropping, and, with regard to the population that is here illegally, 40 percent did not sneak across the border, but rather came here legally and overstayed their visas, he said. And of the 1 million highly skilled workers who are employed in the United States on H1-B visas, only 200,000 are granted green cards allowing them to stay permanently.

“I am sympathetic to people who are thinking that somehow our culture changes with immigration, in a bad way, [although]history would suggest that it has enriched and made our culture unique and special and enriched us in ways that are immeasurable,” he said. “But at a time when people are anxious about their future and anxious about their families, you can see why people would be quite resistant.”

Bush also noted that, from a demographic standpoint, the Republican Party particularly needs to reach out to Hispanic and Asian immigrants. His father, George H.W. Bush, may have won the presidency in 1988 with 60 percent of the white vote, but Mitt Romney lost in 2012 with the same percentage.

“If you have a message that is not inclusive for all, and somehow people have turned off even listening to you, you’re not going to get their votes. It’s just that simple,” he said.

Ironically, Bush noted that immigrants are exactly the kind of people who would be receptive to the Republican Party.

“They’re the ones who don’t get in lines for government programs. They’re the ones that risk everything to come here to be able to put food on the table for their families,” he said.

“Those that want to come and stay here and embrace our values are going to be conservative if we let them be.”

Asked by Rosenbaum if moderate Republicans, such as himself and New Jersey Governor Chris Christie, could find common ground with the Tea Party faction that has risen through the ranks of congressional Republicans, Bush chafed at the description.

“We had such a nice conversation; why did you have to go and call me a moderate?” he said.

“I was brought up to be temperate. It’s okay to have a message that’s not nasty or mean-spirited. The harshness of our message is the bigger issue than the nuances and different strains of conservative thought. I’m a conservative, and I’m a practicing one. I’m not a talking one.”

When asked if he’d run for the president in 2016, Bush demurred, saying whoever does run should reorient the party so it isn’t simply known for its opposition to President Obama.

“We have to create an agenda that restores our confidence that we can be better than we are today, and you can’t do that just in pure reaction to what the other guy says,” he said.