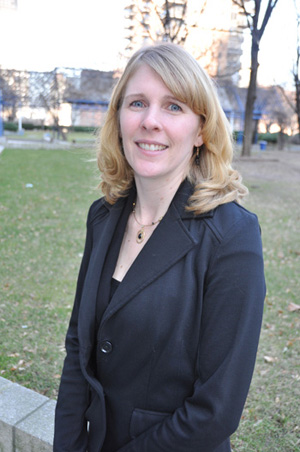 Kristen Turner, Ph.D., says that digitalk used in text messages and e-mails has a place among types of written communication.
Photo by Patrick Verel

“I can’t tell you how many times I introduce myself to parents, and the first thing I hear is, ‘Oh, this texting language is ruining English. All my kids do is text,’” she said. “That’s a big misperception of what’s happening.”

Turner has coined the phrase “digitalk” to encompass communication that occurs between adolescents via modern communication technology, such as text messages, instant messages and social networking comments. “People think that texting is random and that it’s born from laziness. Actually, it’s neither of those things,” she said.

Turner, who taught high school English for six years before coming to the Graduate School of Education, recently published “Flipping the Switch: Teaching Students to Code-Switch from Text Speak to Standard English” in English Journal.

The goal, she said, is for English educators to understand, and in turn help students see, that digitalk is just another form of communication. While it is ideal for one realm, it will not work in another.

Digitalk originated on the Internet as “Net speak” and has evolved with communications technology. Turner saw it emerge in classrooms when she was teaching high school. Aspects of it—such as ignoring capitalization and punctuation—were driven originally by the primitiveness of cell phones. Despite advances that make it easier to type in standard English while texting, digitalk still features many of the shortcuts that once were necessary.

“Students who text are actually using sophisticated speech patterns,” she said, “so if we can understand what those are, we can illustrate how they’re different than the patterns that are meant to be used in school.”

Digitalk characteristics such as irregular capitalization and punctuation are more likely to crop up in students’ academic writing, while shorthand terms—like “LOL”—and emoticons—
like ;-)—are less likely to appear, said Turner, citing a 2008 survey by the Pew Center for American Life, as well as her conversations with English teachers.

“We need to think about language, but if we’re trying to get at content, let’s take the thinking out of language,” she said. “Let’s use the language we use all the time, whether it’s African-American vernacular, or Spanish or digitalk. Then we can focus on what it means.”

Acknowledging students’ digital language in the classroom, Turner said, lends credence to how teens communicate outside of school. In a research project she is conducting, she has found patterns of language that can be considered “conventions of digitalk.” However, because these conventions are loosely arranged, the language can be customized from one person to another, allowing for individual identity.

The study she is supervising will result in a book detailing the characteristics of digitalk and the reasons why teens choose the individual conventions they do. Her efforts are part of an overall focus on how students can master academic discourse, which, once achieved, will allow them to write with power for any purpose.

Thus, she has published “The Influence of Technological Literacy on Students’ Writing” in the Journal of Educational Computing Research about the processes that teenagers use to write.

This is important for educators, she said, because there is a disconnect when teachers ask students who are accustomed to working this way to prove what they know with nothing more than a pencil and paper.

“Technology for writing and composition is a whole new ballgame. Teachers have to figure it out pretty quickly, because the students that we’re teaching are coming from a different place than we are,” she said.