skip to main content
Return to Fordham University
You are at:Home»Inside Fordham»Irish President Imparts Sense of History on Class of 2010

In an address that invoked the glories and tragedies of Irish history as well as persisting injustices of the modern world, Mary McAleese, president of Ireland, called upon the Fordham University Class of 2010 to make the world better in the manner of the founder of Fordham and other advocates for justice throughout the centuries. 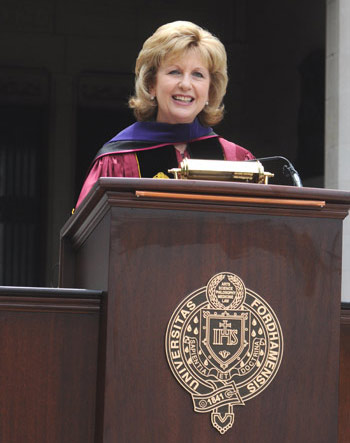 Mary McAleese, president of Ireland, tells the Class of 2010 that the world needs men and women of integrity, who are determined to make things better.
Photo by James Higgins

She urged the students to be agents of change, citing the example of Archbishop John Hughes, himself an immigrant from Ireland who founded Fordham as part of his drive to serve the downtrodden. It was outrage at the injustices he suffered in Ireland that motivated him to serve the poor of New York and help them get a good education, President McAleese said in her address on May 22, delivered on the Rose Hill campus.

“His radical project of transformation was a leaven. This one human being infused into the world around him a leaven that started with the empowerment of one human being and galvanized, through that person’s strength, the potential of whole communities,” she said. “And so we are all here, then, in part because of that passion, that foresight, of an unschooled immigrant from a remote part of County Tyrone.”

She cited the ties of compassion and selfless effort that have bound the United States and Ireland—shown by the contributions of U.S. government and business leaders in the Irish peace process. The United States is a “co-owner” of the peace in Ireland today, she said. She also noted the Jewish community in New York City that helped Irish immigrants fleeing the Great Famine.

“As you leave Fordham, I hope you will take with you the stories of these men and others who inspire you, those who put their gifts at the service of suffering strangers and, in particular, who saw in each stranger a brother and a sister.”

She also spoke of the many disadvantages still faced by women. “In this world where women have access to education and their choice of careers, it’s important to remember just how much work remains to be done in the full liberation of women from centuries of exclusion.”

McAleese, the second woman president of Ireland, is the world’s first woman to succeed another woman as an elected head of state. She was a barrister and law professor before becoming president in 1997.

“You exit into a very chaotic world. I know that,” she said. “But you know, it needs leaders. It needs people like you, men and women of integrity, who are determined to take the lead, to give their best, to do their best at the very least not to make things worse. So ask yourselves, as you exit from this famous quadrangle, among whose names do you want to be counted—the givers or the takers? The carers or the careless? The courageous or the cowed? It is, after all, simply a matter of choice.”

Degrees were conferred upon 4,273 graduate and undergraduate students.

Robert Morgenthau, former Manhattan district attorney, and John K. Mara, owner and president of the New York Giants, each received a doctorate of laws, honoris causa, at the School of Law’s diploma ceremony on May 24.

In his address, Joseph M. McShane, S.J., president of Fordham, referred back to President McAleese’s stories of Irish immigrants. 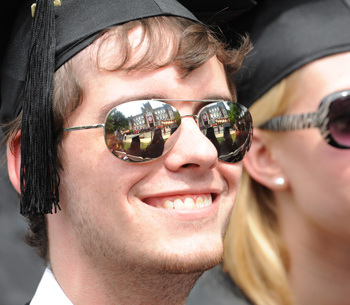 Fordham graduated 4,273 students on May 22 at its 165th Commencement.
Photo by Chris Taggart

“The stories that she told touched a great and deep responsive chord in all of our hearts. Because although they are rooted in the Irish experience, they really are stories that speak to all of us who are the sons and daughters, the grandsons and granddaughters, of immigrants,” Father McShane said. “Fordham is a school that has been enriched by immigrants throughout its long and glorious history—the Irish, the Italians, the Poles, the Germans, the Portuguese, the Puerto Ricans, the Dominicans, the Cubans, those who come from Israel, those who come from Africa and the Philippines. We are a university of immigrants, and we are proud of that, all of us.”