skip to main content
Return to Fordham University
You are at:Home»Inside Fordham»Inspiring ‘Perfect Eloquence’ in the 21st Century 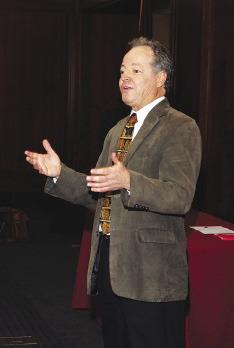 Steven Mailloux, Ph.D., suggests that the digital revolution can be managed to serve the greater good.
Photo by Ken Levinson

That was the question that Steven Mailloux, Ph.D., addressed on Sept. 28 in “Eloquentia Imperfecta: Jesuit Rhetoric and Education in the 16th and 21st Centuries,” the inaugural Distinguished Guest Lecture sponsored by the Center for Teaching Excellence (CTE).

Mailloux, the President’s Professor of Rhetoric at Loyola Marymount University in Los Angeles, began by discussing the concept of eloquentia, which emerged from the rhetorical studies of the ancient Greeks. The Jesuits codified it in 1599 as part of theRatio Studiorum—the official plan of studies for Jesuit teaching institutions.

Eloquentia perfecta, or “perfect eloquence,” refers to refining someone’s written and oral communication skills such that he or she may use these skills gracefully, in service to the common good.

In his presentation, Mailloux explored the role ofeloquentia perfecta when used by “theo-rhetors”—people who speak for or about God—and the relationship between rhetoric and oral, scribal and print media.

He drew parallels between the introduction of the printing press and its impact on rhetoric, and how today’s new media influence eloquentia perfecta. He also discussed the social changes wrought by the shift from oral to written communication that came with widespread use of the press.

“Some argue that the adoption of the printing press encouraged standardization of text,” Mailloux said. “More rapid production reinforced uniformity.”

On the other hand, the mass dissemination of printed works inspired different translations of the Bible. That promoted individual interpretations of sacred texts and different beliefs among religious people.

The lecture concluded with the suggestion that today’s digital revolution can be managed to serve the greater good. “Rhetoric is going to be embedded in the media of the day,” Mailloux explained.

Fordham has applied eloquentia perfecta to its core curriculum. Now in its second year, the curriculum ensures that students take four seminars that are designed to hone written and oral communication skills.

“Fordham sees its eloquentia perfecta classes as essential to the University’s character and mission, and the CTE’s ongoing role in supporting eloquentia perfecta faculty is a primary part of our own mission,” said Erick Kelemen, Ph.D., director of the center.

“The impetus for a lecture in Jesuit pedagogy comes from part of the CTE’s mission, that is, to assist faculty members who wish to know more about Jesuit pedagogy generally or wish to incorporate Jesuit pedagogy in their own teaching,” Kelemen said.

In a lively question-and-answer session that followed the presentation, Mailloux and the audience considered the negative connotation of rhetoric in today’s world.

In closing, he suggested that today’s educators bring together historical, theoretical and critical aspects of rhetoric and counter the negative baggage associated with the term with a positive connotation. “Rhetoric is not just for liars anymore,” he quipped.