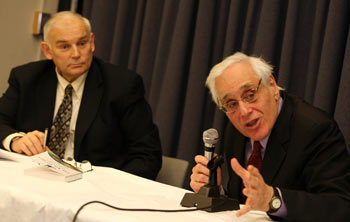 The illusions that Hollywood creates on the big screen make its stars seem larger than life, but the truest Hollywood illusion cloaks the fact that the real “big screen” nowadays is actually very small, according to Edward Jay Epstein, Ph.D., author of The Big Picture (Random House, 2005) and an industry insider.

Speaking at a seminar titled “Hollywood in the Digital Age,” Epstein told an audience that the six major studios that control the motion picture industry are practiced in “the cult of deception,” employing the use of non-disclosure agreements and public relations filters to perpetuate the image of a glamorous movie culture that no longer exists. In the last 50 years, he said, the theatre-going population has dwindled from 90 million viewers per week to 25 million viewers, even though the population has more than doubled. The digital age, he added, promises an even smaller movie-theatre-going public.

“The myth of the box office is totally meaningless. The Associated Press reports it every week, they depict it as a weekly race,” he said. “But today most movies lose money at the box office. After all the deductions, they don’t bring back a penny. A studio is lucky to get 40 cents on the dollar.

“You will always have movie theatres mainly because teenagers want to get out of the house, and they don’t have the money to go to see sports, or music. But the movie theatre has become a launching platform, a place where [studios]try to establish their movie so it is engrained in the public mind, so that the audience wants to see the movie on cable, DVD, video and pay-per-view.”

Epstein fielded questions from the audience and from Everette Dennis, Ph.D., Distinguished Felix E. Larkin Professor in the Graduate School of Business. Epstein’s book pulls back the veil on the budgeting and marketing of major motion pictures. The studios, according to him, make it “far more difficult than the CIA” to uncover such information. The book addresses the social and economic history of Hollywood and identifies the six studios that control the industry—Disney, Fox, Paramount, Sony, Universal and Warner Brothers.

He said these studios take turns opening blockbuster movies each the year in the 10 or 15 large-turnout weekends, such as July 4, Labor Day, and Thanksgiving. These corporate parents have also bought all of the TV channels and almost all the cable stations in the nation, “because it is a business in controlling intellectual property.”

“It is a system designed to squeeze as much money [as possible]out of each platform.” He said that the most predictable form of making money on a blockbuster is franchising and animations—toys and tie-ins. In fact, he said, “Sony exists now on [one]product—Spiderman!”

The notion of a Hollywood “movie set” is becoming obsolete, he said, as movies incorporate digital and special effects, which sometimes—as in the case with Lord Of The Rings—account for 90 percent of screen footage.

“Technically, the film business—the cameras and projection—will become more digital and less analog. It allows a greater amount of control and lower costs,” he said. “And the movie itself will be easily accessible to the world public—much more than now—by simply being downloaded. People will be able to get any movie they want, when they want.”

Epstein said that the piracy of intellectual property is the biggest issue facing Hollywood studios in the coming decade.

With improvements in the technology of cell phones, iPods and other wi-fi systems, it is only a question of time, Epstein said, before the movie business goes to “simultaneous release” of movies in theatres, DVD, pay-per-view and video-on-demand.

In order to fully control piracy with so many distribution routes, he said, studios must work with governments and the Motion Picture Association of America to create the concept that piracy is theft.

“You can create social behavior if you create sanctions against [theft],” he said. “If the Chinese government said that you’d get 10 years in prison for [bootlegs], all the video shops in Shanghai would close.”

Another weapon against piracy is the lowering of the price of DVDs, an economic solution he believes is viable given the profit margins of large studios.

“If you could buy a new DVD for $2.99, would you go out and buy a badly filmed copy for $1?”
Epstein, a former economics professor at the Massachusetts Institute of Technology, writes “The Hollywood Economist” column for the online magazine, SLATE. The event was sponsored by the Asian Business Network and the Center for Communications and the Media and Entertainment Alliance.