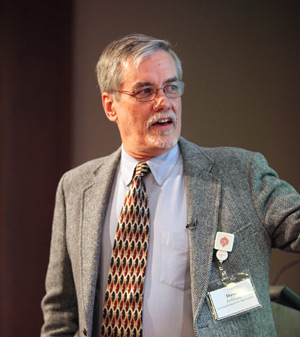 David Robinson, S.J., explains how Jesuits have used technology over several centuries to further their mission.
Photo by Bruce Gilbert

Modern information technology has revolutionized how people communicate with each other, and it has a role in promoting the ideals held dear by the Society of Jesus.

That was the message delivered on April 19 by David Robinson, S.J., associate director of the Loyola Institute for Spirituality, to an auditorium full of IT professionals from Jesuit colleges and universities.

His presentation, “The Role of IT in the Jesuit Mission,” was part of the 25th annual Conference on Information Technology Management, a three-day event held at the Rose Hill and Lincoln Center campuses. It was co-sponsored by Fordham and the Association of Jesuit Colleges and Universities.

As far back as 1556, Jesuits utilized printing presses in Goa, Father Robinson said. In the late-16th and early-17th centuries, Matteo Ricci, S.J., conducted serious research at the observatory at Beijing University, he added.

“Technology, science and exploration were intrinsic parts of what it meant to be in Ignatian mission way back in the 16th century,” he said.

The panelists focused on how technology can be used to bridge gaps in communication—not just stay up to date with the newest fad.

Takooshian asked attendees to consider what he called reverse mentoring.

“In the American Psychological Association, we felt that it was possible to take the natural gift that youngsters have for technology, which very often the old timers don’t have, and institute reverse mentoring,” Takooshian said.

Wasserman said that while some forms of technology—like those that allow students to collaborate on writing assignments—have helped, other times technology has been lauded for its own sake.

“The lesson I need to learn from my students is to get off the technical side of IT and realize that it is a communication medium,” he said. “When we see texting and Facebook and Twitter, we’re seeing expertise in a technology. But the message that has to emerge is that technology is about communication.”

Father DeCola noted that while the traditional debate over whether technology is dehumanizing still exists, concerns being raised today have some elements in common with the past.

“We all know the famous talk about ‘young people today,’ and it turns out to be a quote from Socrates,” he said. “Generational gaps have been around forever, and maybe technology is just the latest one.”

Don Tapscott’s Growing Up Digital: The Rise of the Net Generation (McGraw-Hill, 1997) has helped Father DeCola’s staff get a better sense of the role of technology in students’ lives, he said.

“It’s just the air they breathe these days,” he said.

Jesuit educators need not worry about technology replacing the critical role of the mentor—someone who has the ability to amplify and clarify context, Father Robinson said. There’s a false assumption that people can discover everything they need to know through Google and Wikipedia.

“But it’s the geography of the learner and the learning that is critical in a Jesuit context. That’s precisely the point.”