skip to main content
Return to Fordham University
You are at:Home»Faculty Profiles»Influential Whispering 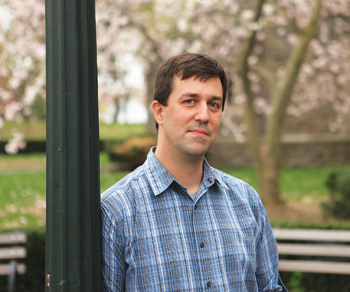 For Stephen Holler, Ph.D., finding the utility of physics beyond the classroom is a cornerstone of his teaching technique and, indeed, his entire career.

The assistant professor of physics wants students to understand how physics works in the real world and to be able to communicate those complex ideas to anyone.

“There’s more to it than going into a lab, turning a knob, and getting some data,” he said. “You have to be able to convey that experiment in a way that’s nontechnical.”

Besides teaching physics to pre-med students, Holler also teaches an advanced course in engineering physics that can be relevant in fields such as medicine or patent law. Regardless, communication remains key, he said.

Before coming to Fordham, Holler was well practiced in communicating with a wide variety of audiences. In graduate school he worked with the U.S. Army on biological aerosol detection. He later went on to work as a staff scientist at Sandia National Laboratories before joining a startup, NovaWave Technologies. NovaWave specialized in laser-based sensors that detect chemical and biological agents and eventually specialized in greenhouse gas monitoring. In 2010, Holler and his partners sold the company, and a year later he joined Fordham’s faculty.

It is that sensor technology expertise he brings to Fordham as he and his students build a lab that expands on groundbreaking work he completed last year with researchers from the Polytechnic Institute of New York University (NYU Poly) and the City University of New York (CUNY). That research detected the smallest known aqueous-borne RNA virus by using a device called a whispering gallery mode biosensor.

To explain by way of an anecdote, Holler said the concept of a whispering gallery is familiar to anyone who has ever been to the Oyster Bar at Grand Central Terminal. At a precise spot outside of the restaurant, if one whispers down toward the terrazzo floor, the whisper ricochets up onto the arched ceiling and into the ear of the listener standing about 20 feet away. To the listener, it sounds as though the whisperer were standing right beside him or her.

The whispering gallery biosensor operates in much the same way, Holler said. But instead of sound waves, light of different colors are “listened” to and the “speaker” is a laser. It’s a tunable laser, so the frequency (i.e., color) of the light can be controlled.

The system employs two fiber optics to harness and measure the light. One fiber is formed into a very small glass ball that is about a hundred microns in diameter, about the same as a strand of hair. This ball becomes the biosensor, aka the whispering gallery. Another smaller fiber measuring about five microns, or one-twentieth of a strand of hair, runs very close to the sphere but doesn’t touch it. It acts as a light guide. As a laser shoots through one end of the fiber, a sensor measures the amount of light that comes out at the other end.

And, as the laser is tunable, the frequency can be adjusted so as to allow just enough light to fall off into the biosensor, where its ricochet movements throughout the sphere can be measured.

When the sphere is coated with a virus or antibody, it creates a further change in the measurement. The process suggests another anecdote.

Last summer, Holler and the NYU Poly/CUNY team added gold nanoparticles to the sphere to create even smaller “hot spots.” It further increased the sphere’s sensitivity and enabled them to measure a single sample of the world’s smallest known RNA virus. The breakthrough was published in the July 30 issue of Applied Physics Letters.

Holler expects further breakthroughs, including a method of detecting protein that appears concurrent with certain cancers. Because of the sphere’s hypersensitivity, his hope is that it will be able to detect cancers earlier than current methods can.

Holler said that Fordham’s own whispering gallery biosensor should be completed later this summer, after which he plans to team up with Patricio Meneses, Ph.D., associate professor of biology, who has spent the last decade working on the human papillomavirus, or HPV.

“I have been working in this area for 10 years, so in about five years it would be nice to see the research commercialized, and of some benefit to those health professionals doing medical diagnostics,” said Holler.