skip to main content
Return to Fordham University
You are at:Home»Faculty Profiles»In Ulysses, a Window Into the Author’s Personal Struggle
English professor Philip Sicker has just finished a book about visual themes in the novel Ulysses, by James Joyce, whose own eyes were failing as he wrote it.
When James Joyce was writing his classic novel Ulysses, he clearly had eyesight and vision on his mind, says English professor Philip Sicker, PhD. For one thing, the theme of sight is creatively presented throughout the novel, undergirding many of its most poignant (or controversial) moments, Sicker said.

And let’s not forget, he added, that as Joyce was writing the novel, his own eyes were failing.

“It’s interesting that someone who is so sight-challenged should write a novel in which so much depends upon visual perception,” Sicker said.

Sicker explores this idea in Joyce’s Spectacles: Sight, Perspective and Representation in Ulysses, his newly completed book that culminates 10 years of effort. “It’s been Joyce saturation,” he joked—in that time he’s also written articles about Joyce, delivered scholarly papers on the author, and co-edited Joyce Studies Annual, which he and fellow Fordham English professor Moshe Gold, PhD, restarted in 2007 after a four-year lapse in its publication.

If any writer can command that kind of sustained study, it’s Joyce, whose famously byzantine and challenging Ulysses is widely thought to be one of the greatest novels of all time.

“When you enter it, you find yourself absolutely immersed in that self-contained, self-bounded textual world” that unfolds within a single day in June 1904, Sicker said. “Although the novel points outside itself in a million different ways, it also has a kind of internal system of reference that makes it endlessly fascinating and intricate.”

He said the book reflects Joyce’s longstanding preoccupation with visual themes, which showed up in his earlier novel, A Portrait of the Artist as a Young Man. When Joyce was writing Ulysses, beginning in 1914, his already weak sight worsened due to cataracts and iritis, a serious and painful disease that later required numerous surgeries. 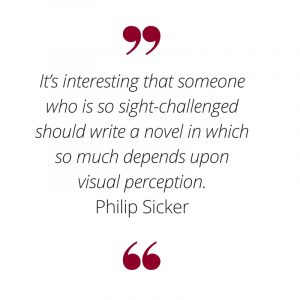 And yet Ulysses is stocked with a multitude of visual references and metaphors: In places, the act of seeing is filtered through visual modes of the day like dioramas and silent films, Sicker said. In the “Proteus” episode, one of Joyce’s two main characters, Stephen Dedalus, is “trying to affirm reality beyond what he regards as the unreliable nature of sight,” invoking the epistemology of Enlightenment philosophers Bishop George Berkeley and John Locke.

“So you’ve got Joyce, in evoking and narrativizing sight, drawing on everything from medieval theology to 18th-century philosophy to technologies of the visible in the 19th and 20th centuries,” Sicker said.

The act of seeing is central to many scenes, including one that hinges on a main character, Leopold Bloom, gazing voyeuristically at a young woman exposing her undergarments as she leans back on a seaside boulder. Others are more poignant, as when Dedalus and Bloom lock eyes in the climactic “Ithaca” chapter in a sort of “visual understanding of one another that goes beyond ordinary, subjective ways of seeing,” Sicker said.

In another episode, “Wandering Rocks,” Joyce describes the movements and interactions of various characters around Dublin in a way that echoes the then-prominent futurist painting style, in which a sense of motion is created by shadowy representations of objects in multiple places, he said. And the concept of failing vision surfaces in the “Cyclops” episode, Sicker noted, when Bloom encounters a bigot who is not only “blinded” by hatred and prejudice but also can’t see very well because he’s intoxicated.

“In the novel, Joyce is acutely aware of failed vision or distorted vision,” Sicker said.

He was aware of it outside the novel too. After a number of operations on his eyes, he was going blind by the time Ulysses was published in 1922, Sicker said. He noted that by the time Joyce started writing his later novel, Finnegans Wake, his sight had deteriorated so much that he had to dictate to an amanuensis, the renowned writer Samuel Beckett (who dutifully included the words “come in” when Joyce said them in response to a knock at the door).

Joyce’s vision problems brought him tremendous anguish, Sicker said. “It was tragic [for]someone who was so engaged with the world visually, and who was so interested in the way we see and how we see.”

As he begins contacting university presses to seek publication of Joyce’s Spectacles, Sicker is starting to write a book on The Decalogue, a series of 10 interrelated films by Polish director Krzysztof Kieślowski that offer oblique meditations on the Ten Commandments. Like Ulysses, The Decalogue “is also a self-contained world,” Sicker said. “I guess I’m drawn to that.”

He’s also helping to manage another sort of immersive experience, this one aimed at Fordham faculty members.

Fordham’s faculty exchange with Ghent University, in Belgium, was launched in the late 1980s by Sicker and a Belgian professor, Kristian Versluys, whom he met during his tour as a Fulbright lecturer. After a hiatus of about nine years, it was restarted five years ago; this fall, linguistics professor Stef Slembrouck, PhD, will come from Ghent to teach at Rose Hill, and Fordham English professor Edward Cahill, PhD, will go to Ghent to teach in the spring. The exchange has traditionally involved professors of English, but will quite possibly expand to include related disciplines, Sicker said.

Teaching in Belgium, Sicker had “eye-opening” cross-cultural experiences, like Belgian universities’ end-of-term assemblies where professors read students’ final grades aloud, prompting reactions that ranged from joyous to devastated. He has participated in the Ghent exchange twice, and found it interesting to see Belgium’s different educational practices, like the greater emphasis placed on lecture rather than in-class discussion.