skip to main content
Return to Fordham University
You are at:Home»Faculty Profiles»In Scholar’s Work on Michelangelo, Insight into the Renaissance Mind
Shown above: The Creation of Adam, by Michelangelo, whose drawings are the subject of art history professor Maria Ruvoldt’s forthcoming book.
Think of Michelangelo and epic works of art come to mind: the Pietà, the David, the ceiling of the Sistine Chapel, and others that evoke Renaissance grandeur.

But Michelangelo’s many drawings, and certain derivative works they inspired, also tell a compelling story about his life and the way art and artists were viewed in the 16th century, says Maria Ruvoldt, PhD, associate professor of art history and a scholar of Italian Renaissance art.

For instance, there was an almost revolutionary idea afoot: that drawings were valuable works of art in themselves, she said. When others created art based on Michelangelo’s drawings, it was treated as if it had been produced by the master himself.

“Any design Michelangelo made, even if it was then executed by another artist, was considered a Michelangelo. It doesn’t matter that it’s not by his hand, because the idea has been reproduced,” Ruvoldt said. “In the 16th century, value was created in a very different way.”

In the book she’s writing, Michelangelo in Multiple, Ruvoldt views these different conceptions through the lens of drawings that Michelangelo produced as gifts for Tommaso de’Cavalieri, a young nobleman he was infatuated with, as well as other works based on the drawings.

The drawings, ostensibly private, didn’t stay private for long, since they were passed around among Michelangelo’s immediate friends and in fact helped bind that group together. They

wound up generating additional art works that were highly sought-after themselves.

“They circulate within a relatively small circle of people, but almost immediately people outside of that circle are aware of them and want to get their hands on them, and they’re copied at an astonishing rate,” Ruvoldt said. Copies ranged from re-drawings to prints and ceramics to sculptures and paintings for elite patrons.

Michelangelo probably wasn’t surprised that this happened, Ruvoldt said. He was at the height of his fame, and the status of the artist in society was in flux. 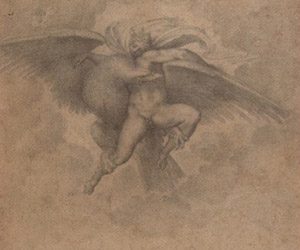 The Rape of Ganymede, by Michelangelo. (Photo courtesy of Maria Ruvoldt.)

“Michelangelo is asserting his autonomy, his ability to make things outside of the traditional client-patron relationship, at a time when people are starting to value the artist as a creative individual and not just as a workman,” she said.

Also in flux was the value of drawings themselves, which were starting to become prized as “residue” of the creative process.

“In a drawing, you can see the artist’s mind at work,” she said. “It’s a transitional moment, really, in the history of the medium of drawings. They start to get collected in this period for the first time.”

The drawings also offered a window into Michelangelo’s personal relationships. With their mythological subjects, they signified different things for different people, depending on how close they were to Michelangelo’s circle of intimates.

One drawing dwells on the myth of Ganymede, a beautiful prince whom Zeus brings up to Mount Olympus to be his cup bearer, or lover. But the story’s other meaning, as an allegory for the elevation of the soul into heaven, provides cover for a racier interpretation that might prompt speculation about Michelangelo’s relationship with Cavalieri.

“Their meaning is debatable, and mutable,” Ruvoldt said. “If you say, ‘Well, they’re obviously about sex,’ I can say, ‘No, no, it’s an allegorization of the soul.’”

The value created by the drawings was basically up for grabs, given the inchoate state of copyright protections at the time. After Cavalieri surrendered one of Michelangelo’s drawings to the Cardinal Ippolito de’Medici, the cardinal turned around and hired the gem engraver Giovanni Bernardi to make a series of rock-crystal intaglios based on it. “Nobody asks Michelangelo if it’s okay,” Ruvoldt said.

Bernardi then made bronze and lead copies to sell on his own, with his own signature on them. “Now they’re not just Michelangelo’s works, they’re now Michelangelo’s and Bernardi’s, and so they’re doubly valuable,” she said. “Michelangelo doesn’t have any ability to say, ‘Stop doing that.’ And that’s the thing that’s in flux, that idea of what constitutes authorship and what constitutes ownership of the design.”

“Those ideas that, for us, seem kind of settled were not at all settled,” she said.

During the 2014-2015 school year, while conducting research for Michelangelo in Multiple at New York’s Metropolitan Museum of Art on a Jane and Morgan Whitney Fellowship, Ruvoldt decided to pursue a longstanding idea of hers: teaching a class entirely on-site, at the museum. She taught it for the first time last fall and will be teaching it again this year.

Spending so much time around the objects during the fellowship sharpened her appreciation for being in their presence. She sees this appreciation in her students as well, when they view ancient objects like a Krater—or Greek pot—in person rather than seeing them in a classroom slide presentation or in a textbook.

“They’re just kind of blown away,” she said. “They didn’t know it was so big, they didn’t know they could see the cracks in it and the places where it’s been repaired. That moment, I think, is a kind of ‘aha’ moment for them.” 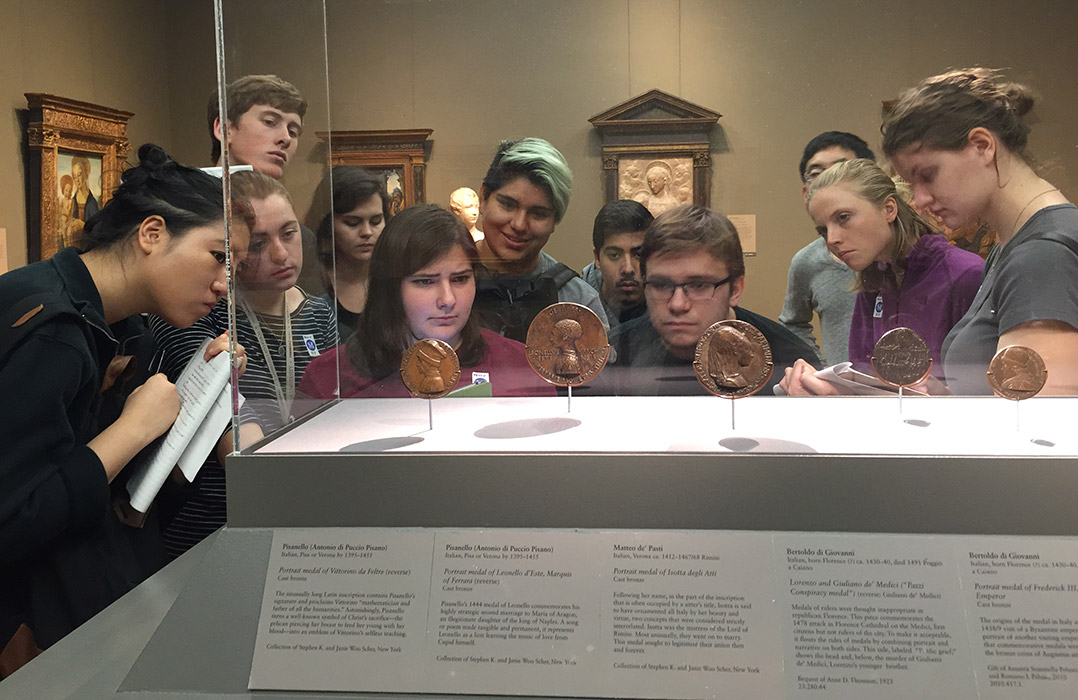