It was the role that was not meant to be. While waiting for a turn to audition for a film, Joe Morton overheard a famous director berate another actor for “not sounding black.” 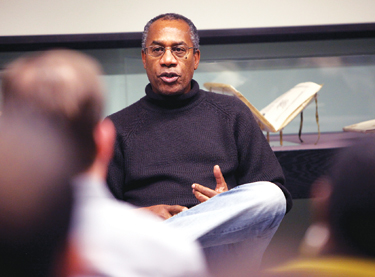 Joe Morton reflected on darkness and blackness and discussed his career on Dec. 7. Morton taught at Fordham in the fall thanks to an endowed scholarship created by actor Denzel Washington, FCLC ’77.
Photo by Bruce Gilbert

Recounting the story to an audience on Dec. 7, Morton, Fordham’s 2012 Denzel Washington Endowed Chair in Theatre, said he decided at that moment that he didn’t care if he got the part.

“I said ‘How dare you? What do you know about blackness? How many black people do you know? Do you think the only sound that comes out of our mouths is something Southern, something urban? As many people sitting out there, there are that many kinds of blackness,’’ he said.

Morton joined Isaiah Wooden, a doctoral candidate and director/dramaturg at Stanford University, in “Performing Blackness in Space and Time,” a reading and conversation about black identity, career paths, and the politics of representation.

The freewheeling conversation with Fordham students and faculty, held at MoBia near the Lincoln Center campus, touched on everything from career paths to the difference between the concepts of darkness and blackness. When one student asked what progress, in terms of blackness, might look like, he suggested progress looks like that event.

Morton, whose breakout role was in the 1984 film Brother From Another Planet, spoke of auditioning for roles he knew were meant for white actors. While sounding like “the voice of God” contributed to his professional success, he credited it more to training and a childhood spent overseas with his father, an Army captain. More than anyone, Morton said, his father contributed to his developing an authoritative-sounding voice.

When his father died, however, the family was forced to move to New York City, where his voice became more of an impediment than an asset. Attending school with other black children, he said, sometimes led to fights.

“I went from Dachau in Germany to 155th Street in Harlem, and I had this voice where no one could tell where I had come from,” he said. “I had done things that they considered ‘white.’ I’d lived in Europe, I dressed differently, my voice was different, and my experiences—while similar in sort of fighting the good fight—were different from theirs.”

Reflecting on his semester at Fordham, the veteran actor said it was terrifying at first because it was the first time that he had ever taught a class. In his class, “Creating a Character,” Morton emphasized five questions that each actor has to ask when approaching a role: Who am I? Where am I going? Who do I expect to meet? What do I want? And, To what extent am I willing to go to get what I want?

The biggest challenge was teaching students techniques that he uses intuitively.
“You have to take several moments to figure out, ‘What exactly do I do?’ It’s like asking somebody to walk across the room. How do you put one foot in front of the other? What’s that process?” he said.

“Everything else in between is what I do instinctually. I then had to explain [that]to 14 students in the classroom. That is where it got prickly, because you don’t want to come across as someone who hasthe answer, because there is no ‘the answer.’ There is an answer, or a series of choices and options you can give them, and that’s what you finally have to come to.”

The class became more fun as the semester progressed, he said, and as he and the students became more comfortable. One of their final assignments was doing monologues that students could use for auditions.

“I’m hearing feedback from them, things like, ‘Well, I’ve asked all the questions I’m supposed to ask,’” he said.

“So they’re actually doing [the]work, which was what I wanted. When they walk out of school, they’ll have a very clear technique of how to approach [acting].”