skip to main content
Return to Fordham University
You are at:Home»Faculty Profiles»Immersing the Course Syllabus with Christine Jones 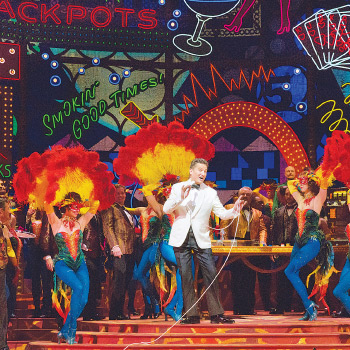 There was a moment in the world premiere of the Metropolitan Opera’s new production of Rigoletto when the audience gave a collective gasp! on seeing the unorthodox, Las Vegas-styled set design.

Though hardly an isolated occurrence when it comes to new productions at the Met, the reaction speaks to the provocative power of scenic designer Christine Jones, Fordham’s 2013 Denzel Washington Chair in Theatre.

As Jones is the first non-actor to hold the chair, her selection is a nod to the theatre program’s growing concentration in theater management and production, which will welcome 14 freshmen this fall, bringing the total number of students to 40.

But Jones, who has recently taken on directorial roles, said that the appointment also speaks to the truly collaborative nature of the theater.

“Great theater-making is about the coming together of different parts, and understanding what other artists are doing,” she said.

Having arrived on the Broadway scene in 2000 with her set designs for director Julie Taymor’s The Green Bird, Jones went on to be nominated for a Tony Award for Spring Awakening in 2007. She was again nominated and won the Tony in 2010 for American Idiot. For Spring Awakening, American Idiot, and Rigoletto, she collaborated with director and former Fordham professor Michael Mayer. 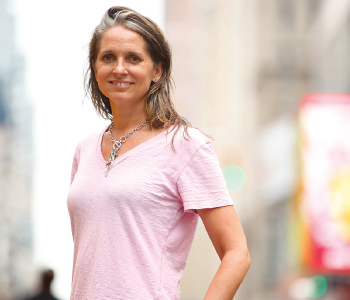 Jones became familiar with Fordham’s theatre program through its Design Meeting, an annual gathering of MFA scenic design graduates from various universities who show their work to the trade. (The meet is still referred to in the trade by its unofficial moniker, “The Clambake.”) Initiated by world-renowned theater designer Ming Cho Lee, the name changed when Lee retired and Fordham Assistant Professor Kris Stone teamed up with fellow Lee protégés and moved the event to the Pope Auditorium.

Jones said her work with Mayer on Rigoletto came about as a result of Met General Manager Peter Gelb’s interest in bringing collaborative teams from theater into opera. Her opera-scaled production comes on the heels of a small-scale project in immersive theater, which brings audiences quite literally into the setting. In immersive theater, the scenic design doesn’t just serve as a backdrop to the story; it is part of the story.

As an artistic director of the Theater for One, Jones pioneered an intensely intimate form of immersive scenic design. After a magician performed a card trick for her at a wedding, she became riveted by the one-to-one exchange between audience and performer. She collaborated with the architectural firm LOT-EK to create a small portable theater made from container material familiar to film crews: black panels trimmed in steel to protect edges and corners. In 2011 the theater was plopped down in the middle of Times Square for a “limited run.”

The tiny venue-for-one consists of a plush red interior reminiscent of a peep show. When the curtain (in this case a sliding red panel) is pulled back, there is no place for the audience member to hide. He or she sits face-to-face with the performer in a moment that New York Times critic Christopher Isherwood described as a “sudden sense of enforced intimacy that carries a charge of disorientation that, let’s face it, is not entirely pleasant.”

“What’s the difference between the one-to-one or the one-to-1,000 experience?” Jones asked. “Whether you’re in large-scale or small, you’re trying to establish a relationship through design, through performance, and through direction.”

Jones’ next project stands to merge a more opera-scaled production with an immersive experience. Working with Randy Weiner, co-producer of Sleep No More, on invitation by Aby Rosen, owner of the Seagram’s Building and Lever House, Jones will be directing a production housed in the old Diamond Horseshoe, a 1940s nightclub in the basement of the Paramount Hotel. The production is part of a $20 million renovation.

What Jones described is not merely a theatrical production, but an event involving all the senses, including taste. Food performance artist Jennifer Rubell will participate in the show, which will be inspired by elements of Mozart’s Magic Flute and will incorporate performances by a Canadian circus troupe.

Just as a circus operates without narrative, so too will this production, said Jones.

“This is the first time I’ve directed on this scale,” said Jones. “Our goal is to create an experience in which there are multiple narrative threads that are revealed through movement, touch, and taste, as well as through text.

“There are individual one-on-one exchanges as well as events experienced communally. The cumulative effect will be different for each individual and will to some extent be dependent on the investment the guest is willing to make in the outcome of the evening.”

For Fordham theater students, the production presents an extraordinary backstage pass to what promises to be one of the most innovative productions of the 2013-14 season.

“I hope to focus the class on what it means to make immersive theater,” said Jones, who has also taught at New York University and Princeton. “And I think we’ll be able to immerse the class as well.”