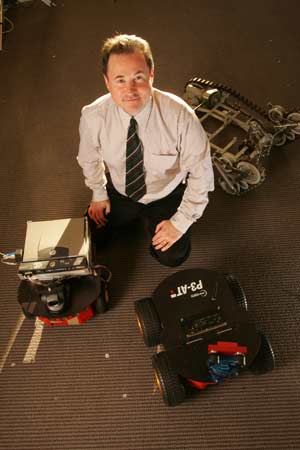 The robot provokes our deep-seated fears and hidden desires: from science fiction writer Isaac Asimov’s “QT-1” imprisoning its human masters on a remote space station, to the roomba, an “intelligent” vacuum that independently carries out an onerous household task, the mass of metal can represent friend or foe. The word comes from the Czech/Slovak robota, meaning ‘serf’ and was coined in Czech playwright Karel Capek’s 1921 work, R.U.R. (Rossum’s Universal Robots). From Asimov’s rebellious automaton to the unthinking, unblinking household servant, the popular concept of a robot is both dark vision and utopian fantasy.

“Robots have got a very bad rap, like the nasty one in Terminator!” said Damian Lyons, Ph.D., chair of the Computer and Information Sciences Department at Fordham. In his Mulcahy Hall Computer Vision and Robotics Laboratory, Lyons and a team of graduate assistants endeavor to dispel the evil image and build the perfect ’bot, beginning with prototypes nicknamed Rambot I and II (a play on the Fordham mascot name and the indestructible Sylvester Stallone screen character).

“We’re exploring goal-directed sensing motion and action in the physical world,” said Lyons. In that physical world, Lyons said, robotic explorers have already helped humans to see what we never could have without their help: Jason brought us images of the long-lost Titanic from the ocean floor; and Dante ventured inside the active volcano of Mount Spurr, Alaska, sending valuable data and images from its infernal regions.

If robots can be so useful, and we give them clever, human names, why do we mistrust them so?
Interestingly, Lyons says, the “evil robot” impression only holds true in the West: in Japan, robots are common, and well liked. A recent article in The Economisttheorized that Western religious believers have difficulty reconciling something made “in man’s image.” The Vatican was even consulted by Honda to see if the company’s human-like robots would offend people. In Japan, however, Shintoism views spirituality existing in all things, and popular movies and cartoons show robots as helpful and friendly to humans—a far cry from Hollywood’s usual fare.

Lyons, who is from Dublin, Ireland, earned his first degree in electrical engineering at Trinity College, and has since been named as inventor or co-inventor on 13 U.S. patents. He’s worked in robotics for 20 years and sees the field’s end product as a great boon to society, producing entities that combine a quick, unthinking connection between sensing and overall disposition to action.

Robots could also be suited the most difficult of tasks—disaster recovery—which poses not only toxicity risks for humans and canines, but also has a great potential for depression and emotional breakdown: in the aftermath of events like 9/11, for example, recovery workers suffer from high incidences of post-traumatic stress disorder.

Robotics appeal to the common sense of the Dubliner—he calls it a “constructionist” approach to science. “In robotics, to prove it, you build it, and you validate it by showing that it works,” he said.

Lyons came to robotics eventually—beginning with an electrical engineering degree at Trinity College, and then a master’s in computer science, he specialized in local area networking and worked on Ireland’s first local area network, a precursor to the Internet, in the early 1980s.

With few opportunities in robotics and artificial intelligence study in Ireland, Lyons earned his doctorate in computer science at the University of Massachusetts, Amherst, where a mentor named Michael Arbib conveyed an important idea. “He molded my perspective,” said Lyons. “[In robotics] we can learn by viewing animal anatomy and behavior as a solution to an engineering problem of designing a system to survive in a environmental niche.”

Lyons says that early robots were too deliberative in their actions, wasting valuable memory and energy in the process. They need to be more reactive, he says, as animals are in nature. His recent research involving Beowolf Clusters—essentially a series of computers networked together to solve a common task—may be one more effective approach to using the memory of the remote network, rather than that of the robot itself.

While working on various robotic issues at Philips Electronics, Lyons constructed devices that could be used in “flexible manufacturing,” putting together appliances like televisions that could vary slightly from model to model, and even within the same model (a unit built for a hospital or prison, for example, is not the same as one a consumer would buy from the showroom floor).

The next step at Fordham is a prototype of a three-legged “Rotopod” (partly inspired by Arthur Clark’s science fiction novel Rendezvous with Rama) designed to “walk” through rubble piles. Lyons’ latest model, because of its swinging rotor arm and adjustable legs, can easily change direction, should not get stuck as often as wheeled vehicles, and is much more energy efficient. “It’s potentially a more effective way to move,” said Lyons.

The Fordham robotics laboratory is also working on a joint project with Pace University in designing a cognitive architecture for a Pioneer mobile robot. The aim is to imbue the machine with a full set of human-like characteristics, including perception, language, learning and problem-solving skills.

The use of automatons also has an ethical dimension, and “Fordham is the perfect place to examine those bigger issues,” Lyons said. He hopes to bring a colleague, Ronald Arkin, Ph.D., of Georgia Institute of Technology’s Mobile Robot Laboratory, to lecture at Fordham’s Center for Ethics Education sometime this year. Arkin specializes in the new field of roboethics.

Lyons also received a bit of flak on campus when it was revealed that funding for Rotopod comes from the United States Department of Defense, but he said that the platform is for search and reconnaissance, not for armed warfare, and its development can be a great benefit to civilian disaster recovery efforts. For example, the helicopter was developed for the military during World War II, but it now saves lives by airlifting patients to hospitals.

Lyons said his work is part of an Irish tradition: while the nation may be known for its poets and politicians, it does have a noteworthy legacy of scientific discovery—men like Robert Boyle, “The Father of Chemistry” and formulator of Boyle’s Law, and Dubliner William Rowan Hamilton, who developed the concept of quanternions, the foundation of much modern algebra. But because of Ireland’s colonial legacy, said Lyons, these men are more often remembered as British, not Irish, intellectuals.

In fact, Ireland’s history made Lyons, who was raised Catholic, a rare breed at Trinity College, traditionally a bastion of Protestant, Anglican thought. Until 1970, the Church excommunicated Catholics who enrolled without a special dispensation. “Twenty years before [my enrollment], it would have been unheard of,” he said.

At Fordham, Lyons hopes to break down another barrier: that of the robot as “a bunch of motors and a clever computer.” By examining parallel fields like neurophysiology and neuroethology, he and fellow roboticists aim to build a better—and smarter—machine.