skip to main content
Return to Fordham University
You are at:Home»Inside Fordham»Hughes Hall Renovation to Provide Headquarters for Undergraduate Business 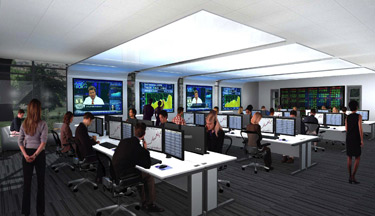 The Fordham University Board of Trustees has taken the first step toward converting Hughes Hall into a new home for the College of Business Administration (CBA), a project that will energize business education at Fordham and dramatically expand the amount of academic space at the Rose Hill campus.

At its Feb. 11 meeting, the Board approved the design and engineering phase for the renovation of Hughes Hall, a 50,000-square-foot residence hall across from Edwards Parade.

“This is good news not just for the College of Business Administration—which certainly deserves a facility commensurate with its stature in the New York business community—but for the Fordham academic community as a whole,” said Joseph M. McShane, S.J., president of Fordham. “Aside from the practical considerations of freeing more academic space on the Rose Hill campus, the decision to completely renovate Hughes Hall for CBA signals the University’s commitment to its academic mission.”

The renovation will provide CBA with the central, integrated facility it has long needed, while making available 10,800 square feet of academic space occupied by CBA throughout the Rose Hill campus.

The Board has approved $10 million toward the total $30 million cost of the project. The remaining $20 million will be raised through Excelsior | Ever Upward | The Campaign for Fordham, the University’s $500 million capital campaign that was launched publicly last year.

“Fordham’s College of Business Administration has become a model for undergraduate business education in the United States,” said Stephen Freedman, Ph.D., senior vice president/chief academic officer. “In the last several years, it has become clear that CBA lacked the proper facilities to carry out its ambitious mission. In approving the Hughes Hall conversion, Father McShane and the Board of Trustees have shown tremendous leadership and vision. The project will not just benefit business students, but will mean a net gain of academic space across the University, enabling the growth of many other programs.”

Named for Fordham founder Archbishop John Hughes, the building has stood near the center of the Rose Hill campus since 1891.

“The trustees are confident we can raise the funds necessary to give Fordham facilities for a first-rate business education,” said Al Checcio, vice president for development and university relations. “We know the alumni support is out there, and that we can deliver a centralized, modern facility for CBA.”

The campaign involves a broad cross-section of the Fordham community: deans, staff members, alumni, and friends of Fordham. The current campaign total is $314.1 million, which includes $100.9 million from current and former members of the Board of Trustees.

The campaign has already resulted in another major construction project at the Rose Hill campus. Thanks to the generosity of alumni, the University is set to open Campbell, Salice and Conley residence halls this fall, which will more than offset the residential space that will be lost through the renovation of Hughes Hall.

Together, the projects will produce a net gain in residential and academic space that supports the goals of educational excellence and national preeminence expressed in the campaign.

The renovation will transform the College of Business Administration by bringing all its students and faculty together under one roof, in a state-of-the-art facility equipped with the latest learning technologies and ample space for special events.

“I’m very pleased that the Board of Trustees recognizes the importance of new facilities for CBA. The renovation of Hughes Hall will provide a much-needed academic center for us at the heart of the Rose Hill campus,” said Donna Rapaccioli, Ph.D., dean of the College of Business Administration and dean of business administration faculty. “To date, we have made enormous progress: CBA has a tightly focused strategic plan and an outstanding faculty and student body. The new academic space gives CBA the physical means to achieve its goals.”

The College is headquartered in Faber Hall, but many of its classrooms and faculty offices are dispersed throughout the Rose Hill campus. The Hughes Hall renovation will establish the sort of learning environment that business schools across the country have been creating for more than a decade.

Since 1995, more than 100 business schools have renovated their buildings or constructed new ones, according to the Association to Advance Collegiate Schools of Business. Eighteen projects are in progress, including 11 that are expected to be done this year, according to AACSB. 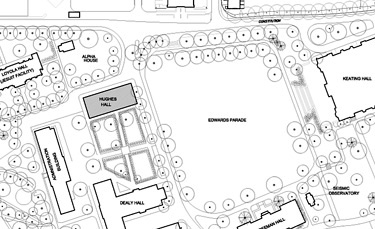 The renovated Hughes Hall will nearly quadruple the college’s physical space. It will contain a computer lab, four board/meeting rooms, six study rooms, a student lounge encircled by faculty offices, a 250-seat auditorium, and nine classrooms of more than 40 seats each.

It will have space for a career center and specialized learning laboratories in global business, entrepreneurship and other subjects. A trading room will be located on the first floor of Hughes Hall, just inside its front entrance.

“For some time now, CBA has needed one central, modern facility for all its operations,” said Christopher F. Fitzmaurice (CBA ’84), a member of the University’s Board of Trustees and CEO of CFF Asset Management. “We’re confident of Dean Rapaccioli’s leadership, and we believe she should have the tools to deliver a first-rate business education to Fordham students. The renovation of Hughes Hall will go a long way in providing those tools.”

Like Hughes Hall, the three new residence halls will have special educational features. In addition to residential space for 450 juniors and seniors, the buildings will incorporate seminar rooms for integrated learning communities, as well as apartments for faculty members. The three buildings measure 166,000 square feet.

The residence halls are named for Robert E. Campbell, CBA ’55, and Joan M. Campbell, who gave $10 million to the University, and Thomas P. Salice, CBA ’82, and Susan Conley Salice, FCRH ’82, who gave $7 million.