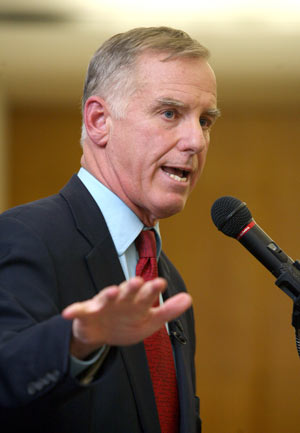 The more Democrats in the U.S. Senate compromise with Republicans on health care reform, the less effective it will be, Howard Dean said on Oct. 15 at Fordham.

Dean, the former governor of Vermont and chairman of the Democratic National Committee from 2003-2009, added that a failed reform effort would create problems for Democrats in upcoming elections.

“We will lose our majority in the House if we don’t deliver health care reform … and that’s a promise,” Dean said in a speech to about 450 students in the McGinley Ballroom on the Rose Hill campus.

“We must not allow sophisticated political maneuvering for the purpose of neutering Barack Obama’s presidency to take over the health care debate, and that is exactly what’s going on.”

While not opposed to bipartisan legislation as a whole, Dean charged his party affiliates in the Senate with giving up too much for little return.

“Olympia Snowe is a fine person, but to give up the public option to keep her on board is to ruin the health care system and to deny the Democrats re-election in 2010,” Dean said. “The penalty for Barack Obama is that he’ll spend the next six years the way Bill Clinton spent his time—fighting a Republican majority and getting very little done.”

In addition to health care reform, Dean touched on partisan politics, education and the war in Afghanistan during his nearly 90-minute speech.

“The bill in Washington is about change,” he said. “The best way to think about it is that Barack Obama has done something that previous presidents haven’t done.”

That, Dean said, is to recognize that although 65 percent of Americans admit that their health insurance plans are expensive and could use some kind of reform, they have also reported being satisfied with their current plans.

“So what Obama realized is that you have got to give people a choice,” Dean said. “Here’s a truth about a single-payer system—it is far more efficient and less expensive than the private system. The average cost of Medicare is that for every premium dollar, 4 percent goes to administrative costs and 96 percent of that dollar is spent on health care. With private health insurance, only 80 percent goes to health care.”

Americans age 65 and older have a choice with Medicare, a plan managed by the government, Dean said, adding that veterans and members of Congress enjoy “socialized” health care courtesy of the government.

“So if people over 65 have it, if veterans have it, if Congress has it, why can’t the rest of us have it?” he said to thunderous applause. “Give us the choice for the first time in the history of the United States of America. Let us choose.”

Regarding the future of the war in Afghanistan, Dean said he supports the president in wanting to deploy more troops.

“It’s not a popular position in America and it’s a very unpopular position among Democrats,” Dean said. “I was very against the Iraq War, but Afghanistan is really different. It harbors people that mean us harm. While you would never invade a country over what I’m about to say—we are there already and we have a responsibility to Afghanistan’s women. They will be 12th-century slaves, serfs or worse if the Taliban takes over, which they could do if we leave.

“We are going to leave at some point,” he continued, “but I believe … that we have to give one more shot at having a decent strategy work.”
In addition to health care, Dean said he would like to lead an effort to improve education for children from birth to age 3.

“Neuroscience shows that by age 3, plasticity in the brain starts to shut down,” Dean said. “I’m not saying that if you have a bad kid at 4 you can’t redeem him, but the cost of doing that is huge. You have got to work with kids prenatally and after they are born if you want to make a difference. We did it in Vermont and had great results.”

“My generation was a very confrontational generation, we protested and fought for many things,” he said. “But then we got burned out and took time off to raise our families and build our careers and things changed. Democracy is a creature of human beings, and it dies if you don’t nurture it.

“This is your president. Barack Obama is your generation’s JFK,” Dean said. “Don’t blow it.”
Dean’s visit was sponsored by the College Democrats of Fordham University in conjunction with the American Age Lecture Series, The Ram and United Student Government.