skip to main content
Return to Fordham University
You are at:Home»Inside Fordham»How Prices are Set, Perceived Can Yield Insights into Minds of Consumers, Scholar Says 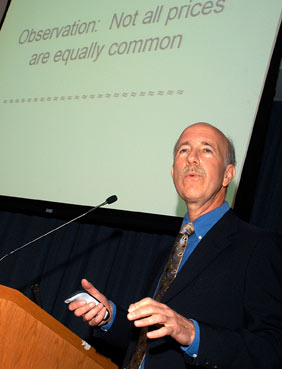 Robert Schindler, Ph.D., is an expert in consumer behavior.
Photo by Ken Levinson

Even though many of us know that a price set at 99 cents or 99 dollars is designed to make it seem cheaper, the ubiquitous pricing practice still works on the psychology of consumers decades after it gained widespread usage, said an expert in pricing at a conference at Fordham University on Sept. 28.

“Some of us know what’s going on, yet the effect happens, anyway,” said Robert Schindler, Ph.D., associate professor of marketing at Rutgers University at Camden and one of the leading researchers on the effects of price endings on consumer behavior. “There’s a system within us that’s, well, not so smart. It’s almost a primitive mentality.”

Schindler delivered the keynote address at the Pricing Conference, where he was presented a Lifetime Achievement Award in Pricing Research. In fact, the conference, organized by the Fordham Graduate School of Business Administration’s Pricing Center, was dedicated to Schindler and his contributions to the field of behavioral pricing.

In his keynote speech on “What Prices Reveal About the Mind,” Schindler said that prices (how they are set and how consumers perceive them) have a unique ability to serve as a model of how the mind wraps itself around something important.

“Prices are the main way people in everyday life interact with numbers several times a day,” he said.

In 25 years of studying the nature and psychology of pricing, Schindler said he has found that prices ending with the number nine are not only common in the United States, but throughout the world.

So how did the pricing practice catch on?

Legend has it that merchants devised the system so that clerks wouldn’t pocket the money from a sale, Schindler told the gathering. “The 99- or 95-price ending ensured that clerks would have to open the cash register,” he said.

Other researchers trace the trend to a Macy’s advertisement in an 1880 issue of the New York Times, Schindler said, that featured black silk on sale for 99 cents, $1.49 and $1.99.

“Retail managers learned the value of having prices just below round numbers between 1940 and 1980,” Schindler said.

The reality, he said, is that prices ending in nine are usually not the lowest. He cited a study he conducted in 2001 that showed that retail prices ending in 99 were less likely than prices ending with another number to be among the lower prices for an item.

Prices, however, have the power to motivate people, especially if they seem to indicate a bargain.

“Getting a discount makes you feel proud, like a smart shopper,” Schindler said. “More than just pride, shopping can have the psychology of a game.”

It’s why some supermarkets often print on shoppers’ receipts how much they saved on that day’s purchase. “It’s like a score,” he said.

The two-day conference at the Lincoln Center campus drew scholars from around the world to discuss everything from consumer price decision-making to Internet pricing tactics. Some 50 scholars made presentations and three graduate students were presented dissertation awards.

Fordham’s Pricing Center, dedicated to developing a better understanding of prices and pricing, conducts and sponsors research and practitioner seminars. It also advocates for pricing education in business school curricula.