skip to main content
Return to Fordham University
You are at:Home»Inside Fordham»Faculty Reads»How One of History’s Most Powerful Monarchs Acquired Knowledge

When we think of the Tudors, we think of Queen Elizabeth, Shakespeare, the Golden Age of the English Renaissance. In many ways, it was a time of great success.

But Ireland represented the great Tudor failure, say historians. England’s relationship with Ireland was historically troubled, with England often seen as the winner and Ireland as the loser. 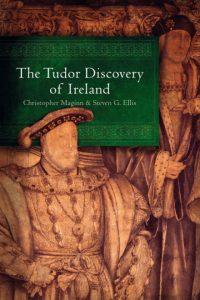 This clash, and Tudor efforts to gather information about Ireland, are the subject of The Tudor Discovery of Ireland (Four Courts Press, 2015), coauthored by Christopher Maginn, PhD, professor of history at Fordham and Steven Ellis, PhD, of the National University of Ireland at Galway.

England’s Tudor officials and the Tudors themselves were trying to govern a country they knew little about. Of the ministers who handled the day-to-day running of government, few traveled to Ireland or were familiar with its customs.

The book shows how the Tudor state and William Cecil—“the premier statesman of the latter half of the 16th century” and “the man who actually governed England”—went about culling information on Ireland, Maginn said.

The book’s centerpiece and inspiration is the Hatfield Compendium, a manuscript akin to a dossier that Maginn discovered while conducting research for one of his previous books, William Cecil, Ireland, and the Tudor State (Oxford University Press, 2012).

The anonymous manuscript was compiled during the reign of Henry VIII. Maginn dated it to around 1538, and named it for its place of residence, the Hatfield House Library in Hertfordshire, England.

The text is an accumulation of documents spliced together and written in one hand. “It is similar to a start-up guide to Ireland, complete with letters, reports, political treatises, and other information on Ireland,” Maginn said.

As Maginn transcribed the text from the original hand, he found that the information in the document was already known to historians, but the massive dossier was the first of its kind in that it compiled a vast amount of data in one place.

Maginn found one of the most fascinating parts of the dossier to be the “A Description of the power of Irishmen.”

“[The document] lists every single Irish clan in Ireland and what the Tudors reckoned their military strength to be, suggesting a war-heavy culture,” said Maginn.

It is difficult to say whether or not the manuscript was ever really used, but it is telling of the way the Tudors acquired knowledge.

“The dossier would have been helpful for the men who used it, but it seems to have been created, seemingly put away someplace for a while, and then long forgotten,” said Maginn.

Maginn’s work on the book was supported by a Fordham faculty fellowship, and by fellowships from the Irish American Cultural Institute and the Moore Institute at the National University of Ireland at Galway.