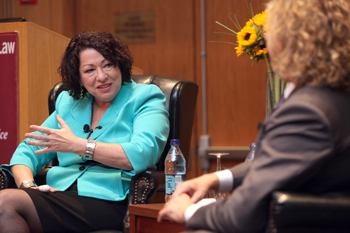 The Hon. Sonia M. Sotomayor explains that television shows and films about lawyers affect those within the legal system.
Photo by Bruce Gilbert

More than 500 people who attended the third feature of the Fordham Law Film Festival didn’t need to look at the screen to see a star of the American legal system.

The Hon. Sonia M. Sotomayor had a front row seat for 12 Angry Men, which was screened at the Fordham School of Law in Manhattan as part of its fifth annual festival.

“You lucky people! This is the hottest ticket in town!” said Thane Rosenbaum, the John Whelan Distinguished Lecturer in Law and director of the Forum on Law, Culture and Society, which stages the film festival with several co-sponsors, including HBO and Time Warner.

When he invited her to the festival, Rosenbaum asked Sotomayor to pick a film to view and discuss. The Bronx native chose the classic from 1957 about a jury deliberating the case of a young man accused of murder. It was directed by Sidney Lumet, who was scheduled to attend, but could not due to an illness. Sotomayor said she was very sorry Lumet could not be there.

“I want him to know he impacted a person who would ultimately become a U.S. Supreme Court justice,” she said. “I thank him for that.”

After the 96-minute film screening, which was held on Oct. 17, Sotomayor explained why she chose Lumet’s film for the festival. She first saw 12 Angry Men toward the end of high school, when her future husband took her to see it.

“All of you probably know that I was inspired [to become a lawyer]by a television character—Perry Mason,” she said. “I had never thought about the juries and their function until I saw this movie. This was my very first inspiration. When the watchmaker in that scene talked about the greatness of democracy being the jury system? It sold me.”

Sotomayor said the scene, which gave her a sense that juries took their work seriously, reassured her that she was on the right career path. And of course, there were plenty of scenes in Perry Mason that affected her. Especially one in which a losing prosecutor says to Mason at the end of a trial that the beauty of being part of the prosecution is that “justice is done when the guilty are convicted and those who are innocent are found not guilty.”

“Those words rang in me probably my entire legal career,” Sotomayor said. “That’s why I chose to become a prosecutor instead of a defense attorney. One of the greatest callings of being a prosecutor is that to do justice, it’s not merely to convict people, it is to investigate until you’re sure that you’re prosecuting a person you believe to be guilty.”

Though she was inspired in her career by the film, Sotomayor admitted it is “so far from reality.”

“When I was a judge, I would bring up this movie and explain to them that some of the things that happened, shouldn’t have happened,” Sotomayor said. “There’s an awful lot of speculation in the film.”

Moreover, Sotomayor said, the drama on films and television shows dealing with the law is a bit overwhelming. 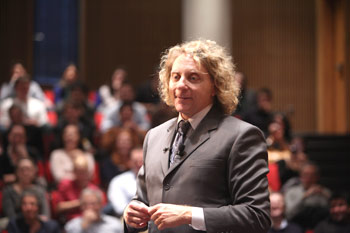 “Real life in the courtroom is filled with tedium,” she said. “Ninety minutes long is not the reality of most trials. Most of the time we watch jurors and realize we have to take a stretch to wake them up.”

Sotomayor recalled a time early in her career when she lost two back-to-back jury trials. She asked a supervisor for advice and he told her the only thing she did wrong was failing to convince the jury of their obligation to be there.

“I would tell my jury that their job was to evaluate the evidence and let the evidence take them to their result,” she said. “I never lost a trial [with a jury]after that.”

Sotomayor said many of the things she did intuitively as a prosecutor came from this movie.

“I would talk to juries; ask them what I could do to make their job any easier,” she said. Though she doesn’t watch much television outside of New York Yankees games these days, there is no question that TV and film affects those within the legal profession, Sotomayor added.

“It impacts with lessons of morality. It motivates,” she said. “I’m sure the law students in this room could tell you their own stories about the movies and shows that motivated them.”