skip to main content
Return to Fordham University
You are at:Home»Inside Fordham»Honors a Matter of Course for Economics Professor and Force of Nature

Dominick Salvatore didn’t know what kind of job he wanted; he just knew he was in the wrong one.

A brilliant young scholar of extraordinary energy—he slept a mere three hours a night—he loved the humanities, especially history. But, a pragmatic son of working-class Italian immigrants, he instead chose engineering and took a job with Bell Labs, work he soon found dry and uninspiring.

Grasping for guidance, he even took an aptitude test, which produced an unequivocal—if wrong
—answer:

“Musician,” he recalled with a laugh.

Fortunately, he compromised between art and science. Now the onetime engineer and not-quite future musician is one of the world’s leading economists.

A Distinguished Professor and director of Fordham’s Graduate Program in Economics, Salvatore is one of the field’s most prolific writers and sought-after speakers. He is the author of an astonishing 44 books, a board member and onetime chairman of the New York Academy of Sciences, an adviser to the United Nations, the World Bank, the International Monetary Fund and major global corporations and a lecturer at universities around the world. He is a Knight of Malta, a winner of Italy’s prestigious Dorso Prize, among many other accolades. His textbook, International Economics(Macmillan, 1983), now in its ninth edition, is translated into eight languages and has influenced a generation of economists. His alma mater, the City University of New York, lists him among its 50 most notable graduates, a list that includes Jonas Salk, Bernard Baruch, Henry Kissinger, Colin Powell, Ed Koch, Intel Founder Andrew Grove and a total of 14 Nobel Prize winners.

His latest distinction: an honorary professorship at the Shanghai University of Finance & Economics. He is the school’s second such honorary appointee after Nobel Laureate Robert A. Mundell. He also was recently named “economics educator of the year” by Strathmore’s Who’s Who, the respected biographical publication. 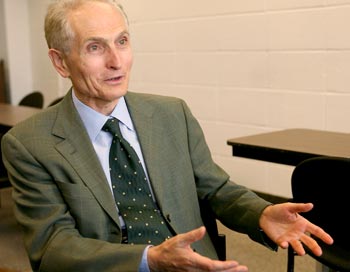 Forty years after his infamous aptitude test, Salvatore hasn’t looked back, or slowed down. Now 66 years old, he travels the world at a pace that would exhaust academics half his age. In September, he was planning a European trip that would take him to five countries in eight days. (His wife, Lucia, travels with him but usually stays put in a single country while he laps the continent.) Indeed, he still sleeps only three hours a night, from 5 a.m. to 8 a.m., physical prowess he chalks up to genes. His mother, 92-year-old Maddalena, still works designing bridal accessories from her home in Queens.

With little left to prove professionally, Salvatore remains driven by an overriding belief in the ability of applied economics to improve the lives of ordinary people. He also very clearly loves teaching and economic discourse. He recently spent hours with a visitor discussing not only his life and works, but tax policy, the effects of trade between poor and rich nations, price theory and the problems posed by the United State’s trade and budget deficits, and much more. In conversation, Salvatore doesn’t so much speak as deliver mini-soliloquies, with an Italian-accented English, bright smile and bent posture that suggest a particularly enthusiastic headwaiter discussing the evening’s specials. Sprinkled with humor and jokes (which frequently skewer the pomposity of fellow economists), his discourse nonetheless carries an underlying earnestness.

“We can take a joke because we know economics is important,” he said at one point. “There are 25,000 children who die of starvation each day and more than one billion people who live on less than one dollar a day. This is World Bank data. Certainly, a world where there is so much poverty, and children dying, is not only a world that is unethical, it also not in the long-term interest of the rich counties, because it cannot be peaceful where there is so much poverty.”

Born in a small village in Italy’s Abruzzi region east of Rome, Salvatore learned the value of hard work, education and pragmatism from his parents. His father, Nicholas, rose from modest means to become chef of a prominent hotel restaurant and learned three languages. Convinced that the United States was the “country of the future,” as he told his son, Nicholas Salvatore moved his growing family to New York City in the late 1950s.

After a few years teaching at his alma mater, he joined the Fordham faculty in 1971, became a full professor in 1978 and has since held numerous posts in the department, including chairman and director of the Ph.D. program.

Over the years, his achievements have been nothing short of astonishing. Besides writing or co-authoring nearly four dozen books, he has delivered nearly 300 lectures and colloquia, written more than 100 scholarly and other articles, contributed to more than 60 books and received two Fulbright awards, while serving as co-editor of Open Economies Review and Journal of Policy Modeling, among many other editorial positions. He even wrote a column for an Italian newspaper. His curriculum vitae runs to 39 pages.

His signature scholarly work, International Economics, is credited with helping push the profession beyond its traditional focus on the domestic economy toward the burgeoning areas of global trade and international finance. Another book, Managerial Economics in a Global Economy (McGraw-Hill, 1989), became a standard text in that field and is now in its sixth edition.

Both his literary and pedagogic work focuses on applied, as opposed to theoretical, economics and seeks to address such problems as underdevelopment, population growth, migration, income inequality and the trade-offs between economic growth and income redistribution. His consulting work has included helping the Argentine government defuse that country’s currency crisis in the late 1990s, evaluating projects aimed at bolstering growth in Africa, and, recently, advising the Egyptian government on how to reform that country’s banking system, which is saddled with uneconomic, nonperforming loans to government-owned companies.

Salvatore shuns both the market absolutism of the right and the command model still favored by some on the left. He holds a balanced, pragmatic view that the purpose of economic policy is to produce the greatest good for the greatest number through a reasonably regulated market.

“First, we have to let the market work,” he said. “But we have to moderate it to give it a human face.”

He has no intention of slowing down. This year, Salvatore co-authored works on topical subjects such as income distribution and the implications of the United States’s twin trade and fiscal deficits. And he remains true to his pragmatic and balanced worldview.

“You cannot philosophize if you’ve eaten more than five hours ago,” he said.