skip to main content
Return to Fordham University
You are at:Home»Inside Fordham»History Scholar Looks at Romania Through the Lens of the German Empire 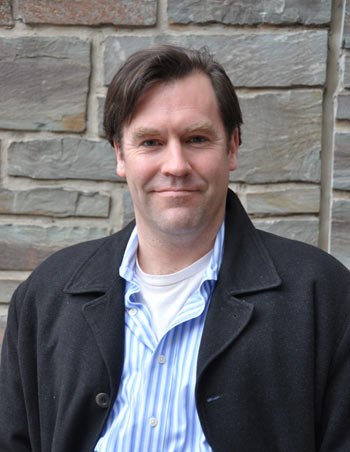 If 20th century Europe has a villain, David Hamlin, Ph.D., suggests it might have to be Germany—a nation that directed the history of the world into disastrous new channels on more than one occasion.

Hamlin, an assistant professor specializing in German history, explores the origins of that history in the most unlikely places.

His first book, Work and Play: The Production and Consumption of Toys in Germany, 1870 to 1914(University of Michigan Press, 2007), used the toy industry in turn-of-the-20th-century Wilhelmine Germany as a barometer for the nation’s progress.

Hamlin interpreted the keen interest in mechanical toys, the rise of consumerism around the Christmas holiday and even the political movements against such consumerist trends, as indicators that Germany was not lagging behind the rest of Europe in modernity—whether it be political, cultural, economic or otherwise. Its flaws, Hamlin concluded, were not in its backwardness.

In his latest project, Hamlin is researching Germany’s relationship with Romania, which it occupied following World War I, to uncover similarities and differences in the imperialisms of the Second and Third Reichs. Hamlin hopes to gain insight into the larger forces that produced two world wars and the Holocaust.

Romania was just one of several countries in Germany’s expansionist empire during the First World War. But it was significant, Hamlin said, for how the Romanian occupation shed light on Germany’s perception of its own imperial dominion.

In 1916, strapped by the costs of the First World War, Germany found itself in dire economic straits, said Hamlin. People in its major cities were starving. Its army and its industries were facing serious shortages of oil.

Romania possessed these natural resources. Although the World War I Allied Forces, led by France, had promised Romania protection in exchange for its support, Germany and the Central Powers captured most of Romania by the late autumn of 1916.

According to Hamlin, Germany had learned from previous occupations in Belgium, Lithuania and Poland that pillaging a nation’s resources and providing its population with nothing in return was a formula for failure. In Lithuania, he said, farmers had simply stopped growing crops once the Germans started appropriating crops without compensating them, or compensating with worthless money or cruel receipts.

(Hamlin noted that a farmer received a piece of paper from a German soldier that read, “The bearer of this receipt is to be hung immediately.”)

To encourage Romanian production, therefore, the German government began printing up its own Romanian currency of Leis with which to compensate the occupied Romanians for grain and raw materials. The money, Germany claimed, was as good because it was backed in the GermanReichsbank by German Marks.

In reality, Hamlin said, Germany had little intention of settling terms with the occupied nation. In fact, he said, the German army intended an “orderly exploitation” of the country. Romanian food and oil would flow to Germany, and nothing but worthless paper would flow back. Germany’s post-war imperialist vision, said Hamlin, was to maintain Romania as a vassal state providing goods as tribute to the German homeland.

“An enormous part of Romanian national wealth was expropriated for the war effort, and it was illegal,” said Hamlin. “They had promised the peasants that this was not Monopoly money, but they had intended all along for it to be so.”

The hubris underlying the Germans’ decision to “strip mine” Romania is fascinating to Hamlin, as it presages the Third Reich.

“We have to realize that in the 1900s, Germany was intrinsically, inescapably part of the West,” he said. “It had all the basic Western institutions: parliamentary government, the rule of law and capitalism. There are a few things that are different, but it’s not by any means an alien society or an alien group of systems.

“And yet it has this enormously pathological outcome.”

“The extraordinary devastation coincident with Nazi imperialism is one of the central problems of history,” said Hamlin. “The nagging historical question is, ‘Why?’ From where in German history did this murderous expansionist impulse develop?”

Hamlin hopes to expand his Romanian research into another book. He traveled to Germany last summer on a Fordham faculty grant and studied archives in Freiberg’s Bundesarhiv-Militararchiv and in Frankfurt’s Deutsche Bank.

An article based on his research, “Dummes Geld (Stupid Money): Money, Grain and the Occupation of Romania in World War I,” appeared in the September issue of Central European History magazine. The article details the German Army’s strategy and reveals how Germany manipulated currencies to achieve its goal.

“There is a remarkable quality of elevating the ends dramatically over the means, so that subterfuge becomes an intrinsic part of practice,” Hamlin said. “In Romania, it was intrinsic to the entire reason of the occupation—to get out what you can get out of it.”

“That doesn’t rise to the same level as setting up fake showers, clearly, but the German occupation was manipulating populations to what they perceived to be their own greater good.”