Space has been fantasized as the “final frontier” by some. But—as Asif Siddiqi, Ph.D., will attest—it’s one thing to romanticize space travel in the Starship Enterprise; it’s another thing altogether to actually build a rocket. 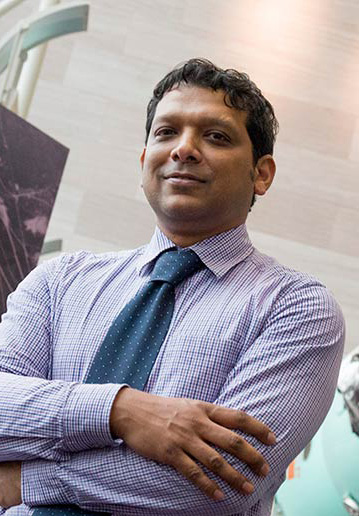 professor of history deconstructs the Soviet Union’s obsession with the fantasy of space exploration and the technology that catapulted the Communist country into the space race of the 20th century.

“Why is it that the Russians sent Sputnik into space in 1957, when the government wasn’t terribly interested?” Siddiqi asked.

The answer, he said, starts in the early 20th century with Konstantin Tsiolkovsky, an eccentric Russian schoolteacher who lived reclusively in a small village. A fan of Jules Verne and other science fiction writers, Tsiolkovsky was also a mathematician. In 1903, he developed an equation in theoretical astronautics for a viable rocket.

“Tsiolkovsky had a particular passion for space travel—how to get there, what to do when we arrived, and why we should go,” said Siddiqi, a specialist in Russian history. “He was a bit of an eccentric who believed that people went into space once they died, but he was an inspirational character for a generation of space enthusiasts in the 1920s.”

In the 1920s, there was a huge global interest in space and the cosmos, indicated by the rise in mass-market science fiction literature and popular cinema. In early Communist Russia, amateur clubs and organizations—inspired by Tsiolkovsky’s writings and dreams of space travel—began building homemade rockets.

“In Russia, there was an emergence in the late-19th century of a mystical notion of the cosmos that was often occultish,” Siddiqi said. “But by the 20th century, an explosion of sci-fi helped redirect that mystical interest into scientific and technical directions.”

Through archival research, Siddiqi found that many of those amateur clubs approached the government for funding to build. Turned down initially, they returned with a different strategy: If the government would fund their rocket construction, the rockets could be used to launch military weapons.

As rocket enthusiasts grew more sophisticated, so did the types of weapons being invented. With the escalation of the Cold War, the Soviet government became more interested in how to launch missiles against targets across the globe.

“By the 1950s, these young rocket enthusiasts were managers of the Soviet missile mission, hired to develop a way to deliver an atomic bomb on the United States,” Siddiqi said.

One such scientist was Sergei Korolyov. In the 1930s, Korolyov had been part of a state-sponsored center for rocket development. But when Stalin came to power, Korolyov was fingered as a dissenter and sent to a gulag in Siberia, and then to an internment camp for scientists.

Korolyov worked his way back into favor inside the Cold War bureaucracy in the late 1940s and, by the 1950s, became head of the nation’s intercontinental missile program under Nikita Khrushchev.

It was the height of the Cold War and the Soviet government was not at all preoccupied with going into space.

“But Korolyov had not abandoned that dream,” Siddiqi said.

Aware of the deep rivalry between the Soviets and the United States, Korolyov began collecting articles from American newspapers on U.S. plans to launch a satellite into space. “The only way to convince the Soviet government to launch a space satellite was to say, ‘The Americans are thinking of doing this. We need to do it, too,’” Siddiqi said.

Siddiqi obtained declassified correspondence in which the Korolyov used the clippings to persuade Khrushchev to give him “a couple of rockets” for space instead of for weapons. Within two years, Sputnik was ready: On Oct. 4, 1957, the Soviets sent the first satellite into space, beating America to the punch.

Even then, Siddiqi said, Khrushchev was nonplussed. Interviews with Khrushchev immediately after successful orbit, said Siddiqi, showed the Soviet leader’s reaction to Sputnik to be “lukewarm” at best.

But when the Western press splashed the news on front pages with the bold, banner headline, “SPUTNIK LAUNCHED,” the Soviets suddenly paid attention. “The Soviets reacted to the reaction,” Siddiqi said. “Once the Russians saw that Korolyov’s side project had caused a global furor, they appropriated and exploited it.”

Today, Tsiolkovsky and Korolyov are national heroes in Russia, with their likenesses found on public monuments across the nation. In fact, the town of Kaliningrad was changed to Korolyov in 1996, and the 1987 ruble bore an image of Tsiolkovsky, who has a namesake crater on the moon.

“Under a very strong, repressive government, you’d expect that popular enthusiasm wouldn’t play a role,” Siddiqi said. “But with regard to the space race, I found that popular support played a huge part.”

In fact, he said, the Russian venture into space couldn’t have happened without it.

“You need both the science and the utopianism, the amateur groupsand the government,” he concluded, “and perhaps even a little irrational justification.”

Working on The Red Rockets’ Glare has inspired some side projects. These include an analysis of the bourgeoning Indian space program and a further historical account of Soviet scientists who did their research in internment camps under Stalin.

“To write the histories of those repressed societies, it is not enough to write just about the leaders,” Siddiqi said. “It is as—if not more—important to take the challenge of recording the lived experiences of the ordinary people.”