skip to main content
Return to Fordham University
You are at:Home»Inside Fordham»Historic Campaign Adds Critical Support Towards a Transformative Education

Excelsior | Ever Upward |The Campaign for Fordham, which closed on March 31 at $540 millon, will go a long way in support of the Fordham community’s drive for excellence in American higher education.

The campaign supports scholarships, endowed chairs, new and renovated campus buildings, and expansions of academic programs and unrestricted funding across the University. The campaign goal of $500 million made it the most ambitious Fordham had ever set; the University had raised $155.6 million through its prior campaign, which ended in 1997. 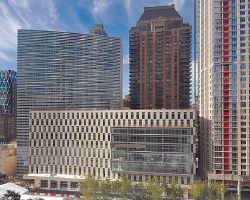 The new law school building, center, as seen from Lincoln Center for the Performing Arts.

“When we announced the end of the campaign at our annual Founder’s Award Dinner, I said it was an evening of gratitude,” Joseph M. McShane, S.J., president of Fordham, said. “And grateful I am: grateful for the ability to offer more students a transformative education; grateful for the support of our highly accomplished alumni, parents, and friends; and grateful for the hard work and diligence of the many Fordham staff who made this milestone possible.”

Begun in 2004, the campaign resulted in $266 million in gifts before it was publicly announced in 2009. Among the gifts in the so-called “quiet” phase were $10 million from Robert Campbell, GSB ’55, and his wife, Joan Campbell, and $7 million from Thomas Salice, GSB ’82, and his wife, Susan Conley Salice, FCRH ’82, for the construction of three residence halls at the Rose Hill campus.

Housing 450 students, the new buildings were critically needed to support the rising population of Fordham students coming from beyond the New York region.

Campaign gifts contributed to other major construction projects: The transformation of Hughes Hall into a central home for the Gabelli School of Business, and the redevelopment of the Lincoln Center campus. The 22-story tower, opening in the fall, includes a residence hall housing 430 students and a state-of-the-art facility for Fordham Law School occupying the first nine floors. 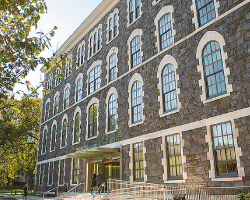 The renovation of Hughes Hall, site of the Gabelli School of Business, was funded in part by Mario Gabelli’s $25 million gift.

Donors gave $133 million in annual funding, which can be used flexibly to support students’ and faculties’ academic pursuits as needed. That total is a full two-thirds greater than the $80 million sought in this area.

The campaign fueled many academic achievements. Last fall, for the fourth time in Fordham history, the University was named a top producer of Fulbright scholars by the U.S. State Department, which administers the Fulbright program. Also, since 2003, Fordham has ascended 27 places—to No. 57—in the annual U.S. News & World Report ranking of the nation’s top research universities.

In athletics, campaign gifts created new men’s basketball offices and a new football locker room, as well as numerous supports for student-athletes—including a media room primarily used by men’s and women’s basketball. Athletic achievements during the campaign period included Atlantic 10 championships in softball, women’s basketball, and women’s swimming and diving, and a Patriot League title for the football team.

The campaign drew support from a wide cross-section of Fordham alumni and friends, and from foundations, corporations and estates. There were 60,000 donors to the campaign, including 92 who made gifts of $1 million or more.

“I cannot say enough how incredibly thankful we are to our donors who have invested in Fordham’s future so generously over the course of the campaign, including our Board of Trustees, whose leadership by example inspired us all,” said Roger A. Milici, Jr., vice president for development and University relations. “The success of the campaign is a testament to our alumni and friends’ belief in the value of a Fordham education, and the trust and respect of its leaders.”

The single largest gift came from Mario Gabelli, GSB ’65, who gave $25 million in support of business education, a gift that was honored by the renaming of the undergraduate business college as the Gabelli School of Business. His gift supported scholarships, academic programs, and a giving challenge that led to the creation of five endowed faculty chairs in business.

Other notable gifts include $3.5 million each from trustee emeritus John Tognino, PCS ’75, and from William Loschert, GSB ’61, both in the area of facilities. T.J. Maloney, LAW ’79, gave $5 million to endow the T.J. and Nancy Maloney Library at Fordham Law School.