skip to main content
Return to Fordham University
You are at:Home»Faculty Profiles»Historian Uncovers a Quiet Fight Against Racial Injustice

Martin Luther King Jr., the Montgomery bus boycott, the sit-ins and marches that swept the South in the 1950s and 60s: For anyone who has taken a course in U.S. history, these images typify the civil rights movement. 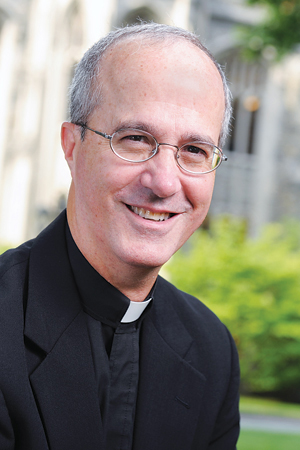 Nevertheless, R. Bentley Anderson, S.J., is quick to point out that a little-recognized faction of the movement was making quiet attempts to end racial segregation more than a decade earlier.

Father Anderson, associate professor of African and African American studies, researches the position that the Catholic Church took on racial segregation in both the southern United States and South Africa, where the apartheid regime enforced white supremacy for much of the 20th century.

In both regions, the official Catholic response was unmistakable: racial segregation was not supported by Catholic teachings of equality, and therefore could not be tolerated.

“Christianity has a universalist view of human beings. There’s one human race… so there’s no room for separation or discrimination,” Anderson said.

Nonetheless, Catholics in both the southern United States and South Africa faced significant obstacles. Outnumbered by other religious denominations and working within Jim Crow society and the apartheid regime, Catholics in both regions struggled to make their message of social justice take root.

“When you’re in an environment hostile to Catholics and you’re only 5 percent of the population, how prophetic can you be? How prophetic should you be?” Father Anderson said.

In his book, Black, White, and Catholic (Vanderbilt University Press, 2005), Father Anderson chronicles the efforts of Catholics in New Orleans to integrate the archdiocese in the years immediately following World War II.

“Most people think that the civil rights movement is Martin Luther King Jr. and the Protestant churches, or secular organizations like the Congress of Racial Equality—but Catholics? What did they do?” he said. “It was a different approach, less confrontational and less prophetic, or outspoken.”

Efforts to integrate church services were met with resistance. Church leadership forced the issue, but this often resulted in displays of racism among the laity—displays that received a strong response from the church.

In one instance, Cardinal Joseph Ritter, archbishop of St. Louis, Mo., threatened to excommunicate hundreds of parents who attempted to take legal action against the Cardinal after he desegregated St. Louis’s Catholic schools in 1947.

In another instance, the white parishioners of a mission in Jesuit Bend, La., turned away a black priest who was sent to celebrate Mass. In response, Joseph Francis Rummel, archbishop of New Orleans, placed an interdict barring any sacraments from being performed at the chapel until the parishioners recanted.

Even though Scripture does not condone racism, some New Orleans Catholics remained ambivalent, Father Anderson said. Clergy and laity alike found themselves caught between Church teaching and the deep-rooted social norms.

“You’re talking about attitudes, and there are different degrees of dislike,” he said. “Some people may be paternalistic, but not racist. It’s not that clean-cut.

“St. Ignatius says that when you’re trying to change hearts and minds, you go in through their door and bring them out yours. So you try to educate, to bring along the person or the community to show that there’s another way of looking at the situation.”

The government, however, severely restricted the Catholic response to racial injustice. In 1953, the Bantu Education Act granted the South African government control of school curricula, a move that favored white supremacist ideology. When the church refused to change its own school curriculum, the government withdrew all subsidies. As a result, most religious schools—which often were the only educational options for rural black students—closed.

“You’re dealing with an authoritarian regime that passes laws to maintain white supremacy,” Father Anderson said. “And when the church in South Africa is relying on foreign missionaries to work in the country, you don’t want to antagonize the government, which issues work visas and permits. So there’s a certain amount of compromise.

“It’s very nuanced,” he said. “That’s what I try to communicate to students. To try to say that the matter is black or white—it’s not that clean-cut.”

Father Anderson, who is working on a book based on his South African research, will communicate some of his findings in a senior values course this spring, Race and Religion in the Trans-Atlantic World, and in a course he plans to offer in South Africa next summer.

And despite the Catholic Church’s struggles in the mid-20th century, racial justice is now the norm.

“Show me another denomination that has done as much. All you have to do is look at Cristo Rey or the Nativity schools, at the work that the various religious sisters and congregations have done, the efforts of the bishops,” he said. “Look at the outreach the church has made toward African Americans, toward Latinos. It has become more prophetic and more engaged.”