The story of Jewish immigrants making their way to, and struggling to succeed in, the United States is a rich and varied one that can be felt deeply in New York City. 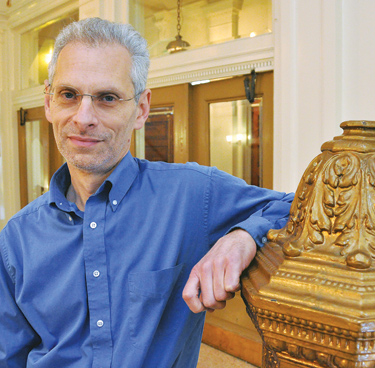 It’s a story that Daniel Soyer, Ph.D., is well-versed in.

Soyer, a professor of history, specializes in American immigration history, American Jewish history, and the history of New York City. His most recent book is The Emerging Metropolis: New York Jews in the Age of Immigration, 1840-1920(NYU Press, 2012), which he co-authored with Annie Polland, vice president of education at the Lower East Side Tenement Museum.

It is the second of a three-volume history of the Jews of New York called City of Promises, which was named the Jewish Book of the Year by the Jewish Book Council. Soyer’s and Polland’s volume focuses a great deal on the built environment.

“We wanted to show the interaction between this group of people and the city as a whole,” he said. “They left a mark, literally, on the streets and the structures of the city, many of which survived Jewish communities in certain neighborhoods. You can still see many of these buildings today even if they’re not occupied by Jewish people anymore.”

In the 1920s, the city’s population was 25 percent Jewish. Jewish communities could be found in all the boroughs. The Bronx was 43 percent Jewish and, by 1910, Brownsville, Brooklyn had a stronger Jewish identity than Manhattan’s Lower East Side.

The Lower East Side is the site of two of Soyer’s favorite historical landmarks: The Forward building on East Broadway, and the Jarmulowsky Bank on Canal Street. The Forward was the leading Yiddish daily newspaper in the world and the biggest socialist daily paper in the country.

Reliefs of socialist leaders Karl Marx, Ferdinand Lassalle, Friedrich Engels, and Karl Liebknecht above the entrance of the building illustrate the paper’s status as the center of the socialist movement at the turn of the 20th century.

“In the second decade of the 20th century, when the building was built, the Socialist Party was for a short period of time the leading party in the Jewish districts,” Soyer said. “It elected a congressman from the Lower East Side, a number of state assemblymen, city aldermen, and a municipal judge.”

“Immigrant banks were very common at the time. Some of them survived and became sizable institutions. The Jarmulowsky Bank actually collapsed right after World War I, [when]there was a run on the bank.”

The pushes and pulls of those two economic systems in New York’s Jewish immigrant community figure in some of Soyer’s upcoming work.

His paper, “Making Peace with Capitalism? Jewish Socialism Enters the Mainstream, 1933-1944,” was published in Chosen Capital: The Jewish Encounter with American Capitalism (Rutgers University Press, 2012). And “Support the Fair Deal in the Nation; Abolish the Raw Deal in the City: The Liberal Party in 1949,” is forthcoming in New York History.

Soyer details how the American Socialist Party splintered into several factions after the Russian Revolution and the New Deal, with one group in New York joining with other independent liberals and labor leaders to create the American Labor Party.

“The New Deal enacted things like social security, unemployment insurance, all kinds of government regulations, and an inheritance tax. Fairly moderate socialists in the mold of modern European Socialist Democrats started saying, ‘This isn’t exactly socialism but it is what we’ve been demanding short of socialism—old age pensions, disability pensions, unemployment insurance,’” he said.

Those who formed the American Labor Party in 1936 took advantage of a quirk in New York state election law to endorse other parties’ progressive, pro-labor candidates, like Republican Fiorello LaGuardia.

This lasted until 1944, when a faction allied with the Communist Party seized control of the ALP. Anti-communist members left to form the Liberal Party. As recently as the 1990s, the Liberal Party endorsements were sought after by candidates looking for support from the left; at its height, it helped re-elect John Lindsay mayor in 1969 and elect Rudy Giuliani in 1993.

“As one Liberal Party activist once put it, ‘We can’t guarantee that a Democrat running for state office will win if we endorse him, but we can guarantee that he will lose if we don’t.’ So that’s where their power came from,” Soyer said.

“This kind of politics is descended from the Jewish immigrant labor socialist politics that you see at the beginning of the 20th century,” Soyer said. “The core of the Liberal Party came out of that experience. In fact, Jewish politics shaped New York’s politics to such an extent that it is central to a full understanding of the history of the city.”