Christopher Maginn, Ph.D., professor of history, draws parallels between the Tudor experience in 16th-century Ireland and America’s recent involvement in Iraq and Afghanistan.

The Tudors were a major European power that aimed to extend their political and social control into Ireland, which was at the time a decentralized and culturally alien region. The exhaustive Tudor conquests continued over 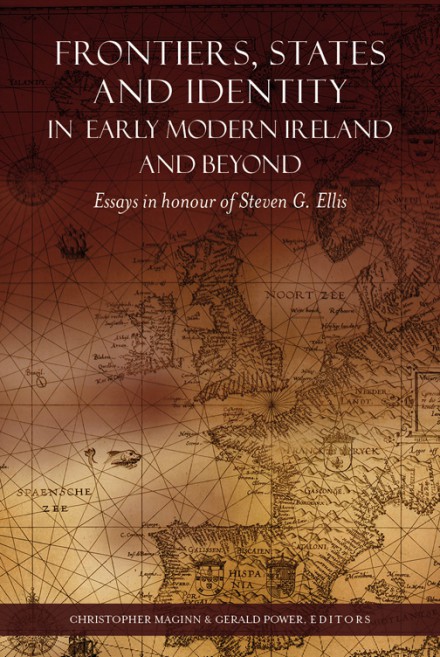 60 years, and still raise questions close to five centuries in the future.

Frontiers, Stages and Identity in Early Modern Ireland and Beyond (Four Courts Press, 2016), is a new collection of original essays on historical Ireland assembled in honor of Steven G. Ellis, professor of History at the National University of Ireland. Maginn co-edited the collection along with Gerald Power, lecturer at Metropolitan University Prague. They asked Ellis’ former students, friends, and colleagues to submit essays based on, or inspired by, Ellis’ celebrated work as a scholar of early modern Irish and British history.

“The volume is geared primarily at academics and college-level students,” said Maginn. “It is our hope (the essays) will not only offer a fitting tribute to Professor Ellis, but will also singularly and collectively throw new light on areas of European history: from 14th-century Ireland to the Netherlands in the 16th century to Iceland in the 19th century.” Interested parties can find the Frontiers… collection here.

Maginn contributed his own essay to the volume: One state or two? Ireland and England under the Tudors. His piece explores whether the two Tudor kingdoms–England and Ireland–were regarded as being part of a united Tudor state, or whether they were treated as two separate states under Tudor rule. “These kinds of questions were a central feature of Professor Ellis’ research on the formation of the early modern British state,” he said.

Maginn has always had an interest in Tudor and Gaelic History, so the clash between Gaelic and English civilizations which occurred in Ireland was a neat fit for his interests, he said. Professor Ellis supervised Maginn’s doctoral thesis more than a decade ago at the National University of Ireland. In the years since, Ellis and Maginn have written two books together The Making of the British Isles: the state of Britain and Ireland, 1450-1660 (2007) and more recently, The Tudor Discovery of Ireland (2015).